Contracts Let Fox Anchors Leave if Ailes Gets the Boot 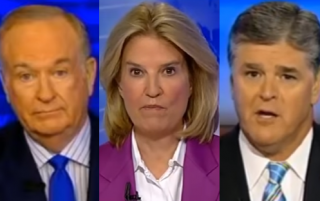 It has been widely reported that Fox News CEO Roger Ailes could be on his way out as a result of an internal investigation of alleged sexual harassment, but if that does occur, he may not be alone. According to the Financial Times, sources say that Fox News anchors Bill O’Reilly, Greta Van Susteren, and Sean Hannity all have clauses in their contracts that allow them to leave the network if Ailes departs.

The Financial Times article refers to an interview O’Reilly gave last year, where he expressed doubt as to where the network would go without Ailes at the helm. O’Reilly said to The Hollywood Reporter that he had “no idea how the network would shake out if he [Ailes] wasn’t here.”

More Fox News employees are speaking out about Ailes as the investigation continues. When Gretchen Carlson first made her sexual harassment allegations against Ailes, many female Fox employees remained silent or supported Ailes against the accusations. Anchor Megyn Kelly initially silent on the matter, but according to New York Magazine, that’s changed. Two sources told the magazine that Kelly has spoken to investigators at law firm Paul, Weiss, telling them in detail about how Ailes harassed her 10 years ago.

Watch: Our briefing on where the Roger Ailes story stands right now. https://t.co/KqxBGB9yQT

The New York Magazine article also reported that former Fox employees who had made harassment allegations had signed non-disclosure agreements as part of settlements with Ailes’ Fox attorney Dianne Brandi. Due to the ongoing investigation conducted by the law firm Paul, Weiss, however, 21st Century Fox is waiving the NDAs and allowing women to speak about their experiences.