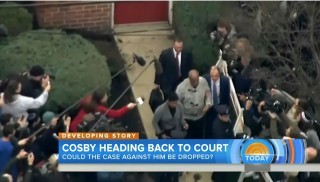 The hearing Tuesday in Bill Cosby’s Pennsylvania criminal case may determine whether the case moves forward. That’s because Cosby wants the charges dismissed. Cosby says he testified in 2005 and 2006 at a civil deposition only after then-District Attorney Bruce Castor promised not to prosecute him for an alleged sexual assault of Andrea Constand in 2004. Without that promise, he would have asserted his 5th Amendment right not to self-incriminate. Instead, Cosby incriminated himself.

The Montgomery County District Attorney says Cosby’s motion to dismiss should be denied because there was no such agreement. On January 20, 2016 the prosecution filed a response to Cosby’s request to dismiss the case. That response includes a number of exhibits that help clarify what happened a decade ago, some of which are linked below, but there are still unanswered questions. Here’s what we know—and what’s still to be answered.

Why is Cosby facing criminal charges?

Cosby allegedly drugged and sexually assaulted Andrea Constand in January 2004 in his home in Pennsylvania. Within a few months, Constand returned to Canada. She reported the incident a year later to Canadian authorities who then reported it to Pennsylvania police. In a February 17, 2005 press release, DA Castor announced his decision not to prosecute and explained the reasons why. A civil case was then filed by Constand. The case settled in 2006 but only after Cosby testified, under oath, at a deposition.

Years later, a number of women came forward to describe strikingly similar incidents of allegedly being drugged and assaulted by Cosby. On July 6, 2015, a federal judge released certain filings that contained portions of Cosby’s deposition in the Constand case. In the deposition, Cosby admitted giving women drugs in order to have sex with them though he says it was always consensual. According to the prosecution, Castor’s successor, District Attorney Risa Vetri Ferman, reopened the investigation into Constand’s allegations days after the deposition was released.

What is Cosby asserting?

Cosby is demanding that the charges be dismissed. On January 11, 2016, Cosby filed a petition for a writ of habeas corpus coupled with a motion to disqualify the Montgomery County District Attorney. He says his due process rights have been violated because there was a binding non-prosecution agreement in 2005. He relied on that agreement and testified at a civil deposition in 2005 and 2006, to his detriment. He would have asserted his 5th Amendment right against self-incrimination had there been no such agreement.

Cosby also claims that the charges should be dismissed because of undue delay in the filing; that is, he wasn’t charged for more than a decade after the 2005 investigation.

In a September 23, 2015 email to DA Ferman, Castor explained that there was a binding non-prosecution agreement from 2005 and advised her to consider this in the reopened investigation. Two days later, in a follow up email, he clarified that it was not a promise never to prosecute; rather it was a promise not to use Cosby’s deposition testimony or any evidence derived from it. In other words, there had to be sufficient evidence to prosecute Andrea Constand’s alleged 2004 sexual assault, independent of Cosby’s testimony and leads from it.

What does the Montgomery County District Attorney say?

What is the evidence of an agreement?

The September 23, 2015 email from Castor alerted then-DA Ferman that, because of his agreement with Cosby, there could be a problem in the reopened investigation if the District Attorney was relying on Cosby’s deposition testimony.

On September 25, 2015, Ferman wrote a letter to Castor asking for written evidence of this promise. Castor responded with an email the same day—the September 25, 2015 email linked above. He said the February 17, 2005 press release announcing his decision not to prosecute was the written evidence of the agreement not to use Cosby’s deposition testimony in a possible criminal prosecution. In the last paragraph of the press release, Castor discussed a potential civil case and said he would not expound further on the matter beyond the press release. He then wrote that he “cautions all parties to this matter that he will reconsider this decision should the need arise.”

Who else knew about this alleged agreement?

According to Castor, the agreement was reached with the knowledge of Cosby’s criminal attorney, Walter Phillips, and Constand’s civil attorneys. Phillips died last February but perhaps he left records to support Cosby’s position. A civil suit was, indeed, filed a few weeks after the decision not to prosecute. In the September 23, 2015 email to then-DA Ferman, Castor also wrote: “[W]ith the agreement of the defense lawyer and Andrea’s lawyers, I intentionally and specifically bound the Commonwealth that there would be no state prosecution of Cosby in order to remove from him the ability to claim his Fifth Amendment protection against self-incrimination, thus forcing him to sit for a deposition under oath.” He went on to say he dealt directly with Phillips and did not deal directly with Cosby’s civil attorneys.

Constand’s civil attorney, Dolores Troiani, recently told CNN she was unaware of an agreement. Ferman told Castor in the September 25, 2015 letter that the DA’s files include no evidence of an agreement nor can anyone recall such an agreement.

When was Constand’s civil suit filed?

Constand’s civil suit for sexual assault was initiated in the United States District Court for the Eastern District of Pennsylvania on March 8, 2005. It was not in existence at the time of the press release that Castor claims is the written declaration that he wouldn’t use Cosby’s sworn testimony at a civil deposition against him. Castor indicates, however, that a civil case was contemplated at the time he decided not to prosecute.

Is Castor’s claim of a non-prosecution agreement politically motivated?

It seems there should have been conversations with Cosby’s attorney before or after the February 17, 2005 press release that would have further clarified the agreement not to use Cosby’s testimony or any evidence gathered as a result of it. If so, Castor could testify to them at next week’s hearing.

It could even border on malpractice for Cosby’s criminal attorney, Walter Phillips, not to have a clear, written agreement with the Montgomery County District Attorney laying out the terms. Why is there none? In their motion, Cosby’s attorneys state that not only is Phillips’s testimony lost forever but also any contemporaneous documents he may have had.

If there were no agreement, why would Cosby testify and incriminate himself? That he did seems to be some evidence there was a deal; otherwise, he was poorly advised by his attorney.

Who’s correct about how to interpret the existence of an agreement? The defense says the court needs to look at contract law particularly when there is no clear written agreement. The prosecution says the effect of such an agreement is equivalent to derivative use immunity that, under Pennsylvania law, can only be conferred by order of a judge, and there was no such order.

What are the possible outcomes of this week’s hearing?

There are at least three possible outcomes of this week’s hearing but don’t expect an immediate decision. It could take some time for the judge to release it.

1. The judge could find that a binding non-prosecution agreement exists and dismiss the charges.

2. The judge could find that the agreement Castor recollects did exist which means the case goes forward but without Cosby’s deposition testimony and any evidence gathered as a result of it. The prosecution would have to rely on other evidence.

3. The judge could find that there was no agreement; that Cosby testified at his own risk; and that the prosecution can use his civil deposition testimony against him in the criminal case.