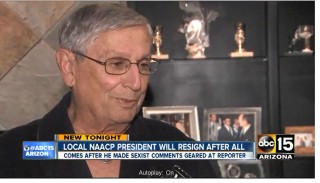 A Phoneix NAACP board president has resigned after telling a female reporter she had ‘nice tits’ as she turned her back. 77-year-old Donald Harris said it was a ‘stupid thing to say” and that he ‘screwed up.’ Many were outraged by his sexist remarks.

Donald Harris made the statement to Monique Griego, a reporter with the NBC affiliate KPNX . She was asking him questions after a NAACP meeting to discuss a picture of high school girls wearing t-shirts that spelled the ‘n-word.” We told you about that last week. Griego and other reporters were asking Harris questions about what happened during the meeting when he said the comment.

Harris made a half-baked apology to a reporter with the Phoenix New Times after he was asked about the incident.

“The meeting was over,” he told the newspaper,  “I apologize if anyone was offended. I could have said nothing . . . I’m really f**** sorry.”

Harris has served as president of the local NAACP board since last January.  The same group that was calling for an investigation into the high students who took the offensive picture, also called for Harris’ resignation, according to The Arizona Republic