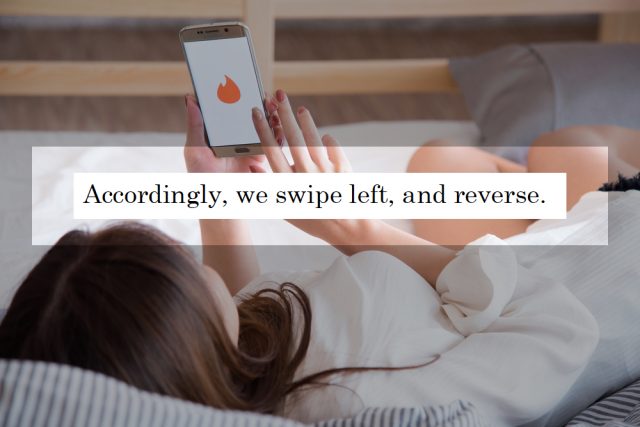 Tinder, Inc. can no longer charge older users more than they charge younger users for some of the company’s premium services, a California appeals court ruled on Monday.

The court’s decision, penned by Judge Brian S. Currey, begins with an efficient summary of how the Tinder app works. Currey writes, for the court, “The original app began, and is still offered, as a free online dating service. It presents users with photos of potential dates. The user can swipe right to express approval, or swipe left to express disapproval.”

During our testing we’ve learned, not surprisingly, that younger users are just as excited about Tinder Plus, but are more budget constrained, and need a lower price to pull the trigger.

We conclude the discriminatory pricing model, as alleged, violates the Unruh Act and the UCL to the extent it employs an arbitrary, class-based, generalization about older users’ incomes as a basis for charging them more than younger users. Because nothing in the complaint suggests there is a strong public policy that justifies the alleged discriminatory pricing, the trial court erred…

The final line of Currey’s introduction employs the literary device known as bringing-it-all-back-home.

He writes, “Accordingly, we swipe left, and reverse.”