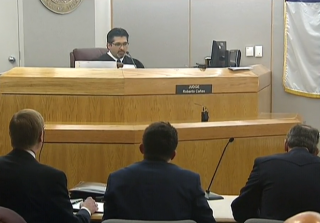 Johnny Manziel, the former quarterback for the Cleveland Browns, is scheduled to appear before Judge Roberto Cañas in a pre-trial hearing on Thursday for his domestic violence case. Manziel, 23, was indicted by a grand jury in April on a misdemeanor assault charge, and turned himself in to police in Highland Park, Texas on Wednesday. He is accused of assaulting his girlfriend, Colleen Crowley. After his arrest, Manziel posted $1,500 bond. At the hearing, Judge Cañas will review the terms of his release.

Watch live video of the hearing here, courtesy of WFAA: