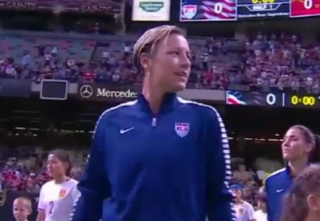 U.S. soccer champion Abby Wambach was arrested early Sunday for allegedly driving under the influence. According to police, the recently retired star, 35, was pulled over while driving in Portland, Oregon Saturday night for driving through a red light, and then allegedly failed a sobriety test, ESPN reported. She was charged with misdemeanor DUI at 2:02 am on Sunday.

Wambach, international soccer’s leading career scorer for men and women, was said to be “polite and cooperative,” and was released on her own recognizance as she awaits the next step in her case.  Later on Sunday, she posted about the incident on Facebook, saying she “let myself and others down.” “I take full responsibility for my actions,” she said. “This is all on me. I promise that I will do whatever it takes to ensure that my horrible mistake is never repeated.”

In the meantime, MINI USA, who sponsors Wambach, announced that they are pulling their car ads that feature her. The automaker released a statement saying, “This behavior is against the values we promote as an organization, and the safety of everyone on the road is a priority here at MINI.” They said they are “re-evaluating her association with the brand” but “will continue to assess the situation and weigh [their] options.”

[h/t and screengrab via ESPN]