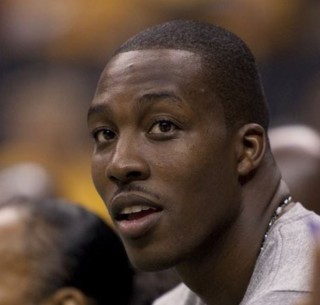 The NBA is now reviewing an incident involving Houston Rockets Center Dwight Howard who admitted to using ‘Stickum’ spray during Saturday’s game in Atlanta. In fact, he admitted to using the substance during games for years.  Stickum is an adhesive like substance that is usually sprayed, and can potentially be used to gain an unfair advantage. The basketball in question was removed from the game after Hawks’ Paul Millsap alerted the referee to the substance on the ball.

“I’ve never felt the ball like that ever. It was sticky. It was like super glue or something was on there. It was the weirdest thing ever,” Millsap told The Atlanta Journal-Constitution following the game.

Howard on his Stickum: “I don’t know why people are making a big deal out of it. I do it every game. It’s not a big deal. I ain’t tripping.”

The lead official Monty McClutchen reportedly took the ball and issued a warning that “stickum is illegal in the NBA.” But, one can understand how Howard got confused about whether the substance is legal during a game. Stickum is actually not a banned substance by the NBA, according to legal experts contacted by LawNewz.com.

“I think what the referee/official was referring to during the game was the fairness issue under Article 21 of the NBA CBA (collective bargaining agreement), not specifically stickum as a named substance.  We can be sure the league will clarify the use of stickum going forward,” sports law attorney Jeremy Evans told LawNewz.com. Evans is the director for the Center for Sports Law & Policy at the Thomas Jefferson School Law. He said that stickum is not listed as banned under Article 21 of the NBA Collective Bargaining Agreement. Interestingly, it is banned under the National Football League’s collective bargaining agreement.

So, could Howard be disciplined for the incident anyway?

“Unlikely, because, first the substance is not banned.  Second, Howard had no notice that the substance was banned so his due process rights would be violated if a punishment was now placed upon him.  Third, however, it is likely that the NBA and Players Association will discuss an agreement to ban future use or excessive use of the stickum substance.  There will also be a larger discussion on the use of stickum in 2017-2018 as the current NBA CBA expires after the 2017 season,” Evans said.

The AJC also reports that the Rockets failed to produce the spray can when asked by league officials.

“It is somewhat interesting from an investigative standpoint that the Houston Rockets staff did not produce the can of stickum immediately to NBA officials.  Due diligence or investigative interference?  If the NBA is wise, it will be sure to look at the entire course of events,” Evans said.

There is no indication yet, when the NBA will complete their review of the incident.