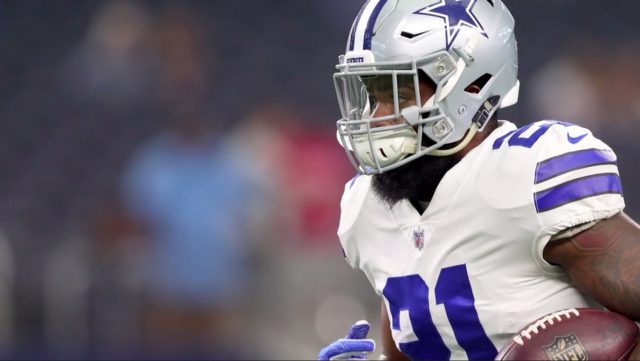 Last year’s league rushing leader was already cleared to play in the opener against the New York Giants on Sunday night before the ruling by U.S. District Judge Amos Mazzant. It’s uncertain whether an NFL appeal can get the suspension reinstated this season.

Mazzant agreed with players’ union lawyers that Elliott didn’t receive a “fundamentally fair” hearing in his appeal and he granted the NFL Players’ Association request for a temporary restraining order and preliminary injunction blocking the league’s punishment.

Elliott was suspended by Commissioner Roger Goodell in August after the league concluded he had several physical confrontations last summer with Tiffany Thompson, a former girlfriend. Prosecutors in Ohio didn’t pursue the case, citing conflicting evidence.

The 22-year-old Elliott denied Thompson’s allegations in sworn testimony during an appeal hearing last week. He also attended the hearing for the restraining order earlier this week in Sherman, about 65 miles north of Dallas.

“We are very pleased that Mr. Elliott will finally be given the opportunity to have an impartial decision-maker carefully examine the NFL’s misconduct,” Elliott’s attorneys said in joint statement. “This is just the beginning of the unveiling of the NFL’s mishandling as it relates to Mr. Elliott’s suspension.”

About the time of the ruling, Elliott posted a highlight video on Instagram with a message that read, “Momma told me if ya fall never stay down.” He hasn’t spoken publicly since the Cowboys reported for training camp in late July.

Arbitrator Harold Henderson turned down Elliott’s appeal of the suspension the same day as the hearing in federal court. Henderson ruled that the NFL complied with its personal conduct policy in punishing Elliott and rejected any claims that Elliott’s attorneys presented new evidence at the appeal.

Mazzant’s ruling took aim at Henderson and the NFL, saying decisions not to allow Goodell and Thompson to testify at the appeal were among several factors unfair to Elliott.

The judge also faulted the league for what he saw as several efforts to conceal the opinion of co-lead investigator Kia Roberts. She testified at the appeal that she didn’t think Thompson was credible and didn’t support any punishment for Elliott.

Mazzant noted that Henderson allowed Roberts to testify at the appeal over the objections of NFL attorneys who claimed her testimony would be consistent with what was presented to Goodell when he made the decision to suspend Elliott.

“Luckily, the NFLPA found the fairness needle in the unfairness haystack and Henderson ordered Roberts to testify,” Mazzant wrote. “The arbitration record shows that Roberts’ testimony was everything but unnecessary, consistent, and cumulative.”

NFL spokesman Brian McCarthy said the league was reviewing the decision and would discuss its next steps with attorneys, including possible appeals in district court and with the U.S. 5th Circuit Court of Appeals.

“We strongly believe that the investigation and evidence supported the commissioner’s decision and that the process was meticulous and fair throughout,” McCarthy said.

Mazzant also ruled that Henderson erred in not allowing some investigators’ notes to be presented on appeal.

“The NFL’s actions demonstrate that from the very beginning of the decision-making process, a cloud of fundamental unfairness followed Elliott,” Mazzant wrote. “Unfortunately, this cloud followed Elliott into the arbitration proceedings.”

The union used the ruling to reiterate its complaint from almost three years ago. That’s when the NFL stiffened its domestic violence policy with the six-game standard and more investigative power while the union objected that alterations should be part of a labor deal.

The NFL’s changes came after the league was sharply criticized for its handling of a domestic incident involving former Baltimore running back Ray Rice.

“This ‘imposed’ system remains problematic for players and the game, but as the honest and honorable testimony of a few NFL employees recently revealed, it also demonstrates the continued lack of integrity within their own league office,” the union said.

After Henderson’s ruling, the NFL filed a lawsuit asking a federal court in New York to enforce Elliott’s suspension, but the Southern District of New York hasn’t acted.

Brady won in federal court before the league prevailed, but the legal process delayed the suspension for a year. The five-time Super Bowl champion served the punishment at the start of last season.

New Orleans running back Adrian Peterson, who was suspended over a child abuse case in Texas while with Minnesota, had his punishment upheld by Henderson and later overturned by a federal judge.

According to the letter Elliott received informing him of the suspension last month, the NFL believed he used “physical force” three times in a span of five days in a Columbus, Ohio, apartment last July resulting in injuries to Thompson’s face, neck, shoulders, arms, hands, wrists, hips and knees.

Prosecutors in Columbus decided about a year ago not to pursue the case in the city where Elliott starred for Ohio State, but the NFL kept the investigation open. The league said its conclusions were based on photographs, text messages and other electronic evidence.

Elliott rushed for 1,631 yards as a rookie to help the Cowboys to the best record in the NFC at 13-3. He was a full practice participant throughout training camp but played in just one preseason game, same as a year ago when Elliott missed significant time in camp because of a hamstring injury.