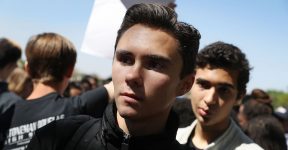 Conservative Twitter is mocking Marjory Stoneman Douglas High School shooting survivor David Hogg for his complaint to Axios about the school’s clear backpack policy, an apparent added security measure students are supposed to come back to after spring break.

Hogg, who has been one of the most outspoken and visible Never Again campaigners since the deadly shooting — and who was even accused of being a “crisis actor” — said the normal backpack ban is “unnecessary” and “embarrassing for a lot of students.”

Hogg: “After we come back from Spring Break, they’re requiring us all to have clear backpacks…it’s unnecessary. It’s embarrassing for a lot of the students.” #Axios360 pic.twitter.com/xvR8aP5th1

“After we come back from Spring Break, they’re requiring us all to have clear backpacks…it’s unnecessary. It’s embarrassing for a lot of the students,” he said.

The way this was received on Twitter was essentially, “So, how does it feel to be have your rights limited by common sense?”

Huh. So common sense limitations on a right you highly value will be ineffective, have undesirable effects, and are therefore unacceptable? I wonder if that same argument has other applications. #2a https://t.co/99YGD0iYKq

If you won’t abandon the 2nd Amendment, you don’t care about dead kids, he says-

So, he wants to take away our rights but doesn't want a clear backpack? https://t.co/fUafzrDIbj

If David Hogg will not be willing to give up his opaque backpack for the safety of children, he has blood on his hands. #worksbothways #hypocrite https://t.co/Pjh48CswRU

The school is actually taking actions to help improve safety, and you're upset with it? https://t.co/I0Vbdtmikx

At least two fellow students have criticized the policy, saying that going to school will be like “going to prison.”

After spring break I will no longer be going to school. I will be going to prison. I will wear a clear backpack and they will wave metal detecting wands until they can get the metal detectors. My student number will now become my inmate number.

but the fact that i will now have to have a clear backpack and a school ID on me at all times makes it feel like a prison. i love douglas. it’s my second home and it’s hurts me so much to see it fall apart in light of these events

Still others said that backpack policy is an indication that school administrators, not students, are the ones eating Tide Pods.

That is so stupid the guy who shot up the school in a rifle I doubt that it would have fit in a backpack clear or otherwise. That's their response not armed guards in the school but clear backpacks. I think the school administrators are eating Tide Pods to.

Clear backpacks aren’t the only school policy change in lieu of gun legislation many of the students are seeking.

Students and staff have to wear IDs while on school grounds. Permanent metal detectors are also being discussed.