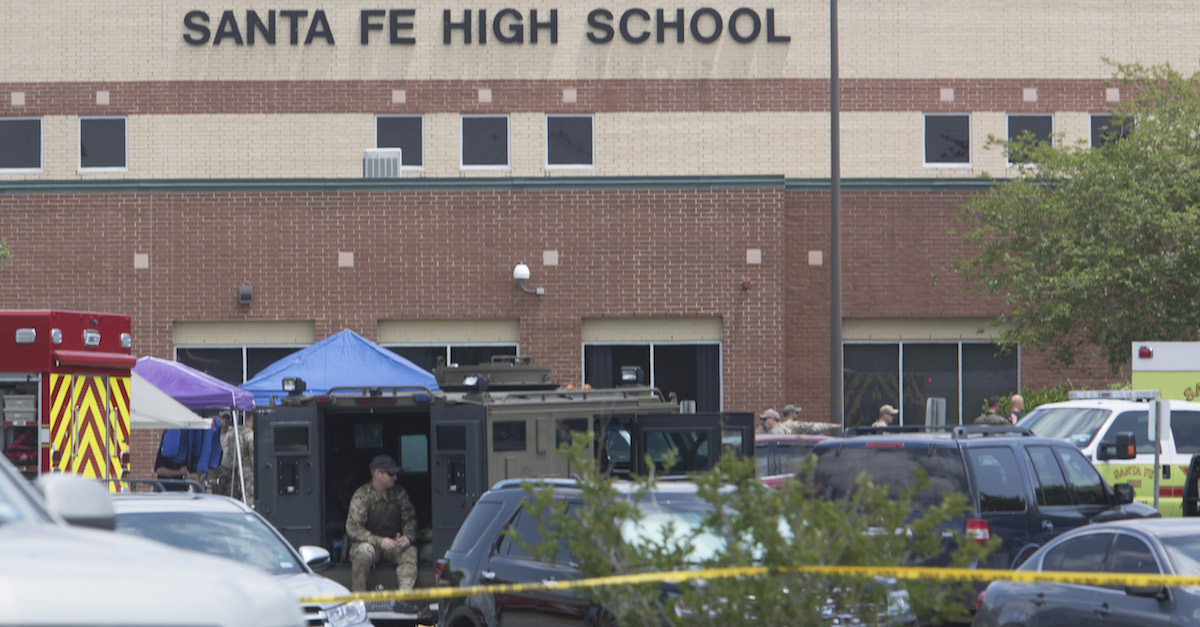 New information continues to come out of Texas as authorities work the crime scene at Santa Fe High School, where 10 were killed Friday morning. Federal law enforcement have confirmed that the suspect is 17-year-old Dimitrios Pagourtzis, pictured below.

Pagourtzis reportedly possessed a shotgun and pistol. Texas Gov. Greg Abbott (R) confirmed that a .38 revolver and shotgun were recovered from the scene. The suspect is 17, so it was already known that it was not legal for him in the state of Texas to buy or own guns.

They reportedly belonged to his father. Other news sources said the shooter also had an “assault-style rifle.”

NBC's Pete Williams: The TX high school shooter had a shotgun, an assault-style rifle, and a pistol

A student said the shooter yelled “surprise!” before shooting up the classroom.

Santa Fe High School freshman student tells us the shooter busted in through the door, yelled “surprise!” and began to shoot in the classroom. #SantaFeHighSchool

There appeared to be warning signs about Pagourtzis, including: an interest in animal torture, a trench coat with USSR and Nazi medals on it, and a t-shirt that said”Born to Kill.”

UPDATE: Shooter has been identified as 17-year-old Dimitrios Pagourtzis.

According to his social media pages, he had a vested interest in guns, knives and animal torture. He also owned a trench coat with USSR and Nazi medals on it.https://t.co/SwEsIcr2iY pic.twitter.com/bNjbpDl8Dx

Another student said he “always walked around in a trench coat.” Perhaps this is the one to which Zach M. was referring.

Santa Fe High School student Zach M. tells us right now the shooter had a sawed off shotgun and a pistol. “He always walked around in a trench coat”, he said of the shooter. #SantaFeHighSchool

17-year-old Dustin Severin told KPRC-TV he saw Pagourtzis wearing the trench coat before the shooting and that it is his “usual outfit.”

“He wears a trench coat every day, and it’s like 90 degrees out here,” Severin said.

Beyond the suspect’s social media footprint and what fellow students observed, there weren’t warning signs in terms of criminal history, Gov. Abbott said.

Governor Abbott: There were no warning signs, no criminal history for #SantaFeHighSchool shooting suspect. Only red flag was picture of shirt on his Facebook page that read “Born to Kill” #khou11 https://t.co/gn8BRLhzIl

Father Stelios Sitaras, a priest at Assumption of the Virgin Mary Greek Orthodox Church, told the Associated Press the shooter as “a quiet boy.”

“You would never think he would do anything like this,” he said.

KHOU reported that at least 8 were killed and Harris County Sheriff Ed Gonzalez said the number of dead was between 8 and 10.

Gov. Abbott later confirmed that there were 10 killed and 10 wounded.

The scene was described as a “bloody mess” and authorities said Pagourtzis also had pipe bombs.

“Officers inside encountered a bloody mess in the school,” a source told the Houston Chronicle. “Evidently this guy threw pipe bombs all in there. We don’t know if any of them went off.

President Donald Trump responded to the news Friday morning, saying, “This has been going on too long in our country, too many years.”

"This has been going on too long in our country, too many years, too many decades now" – President Trump on reports at least eight people are dead after shooting at Santa Fe High School in Texas https://t.co/n5ZUtzkzO9 pic.twitter.com/qbQrY9zjiW

We are fighting for you.

Get ready for two weeks of media coverage of politicians acting like they give a shit when in reality they just want to boost their approval ratings before midterms.

Not a single one of you should know me. Or any of my friends. But you do because we come from one of the hot school shootings of the month. Now we have another. Another community attacked that will only be further attacked by the NRA. Welcome to America, folks. This happens here.

At least 8 students have been shot and killed at Santa Fe High School.

Prepare to watch the NRA boast about getting higher donations.

Prepare to see students rise up and be called ‘civil terrorists’ and crisis actors.

Prepare for the right-wing media to attack the survivors.

Santa Fe High, you didn’t deserve this. You deserve peace all your lives, not just after a tombstone saying that is put over you. You deserve more than Thoughts and Prayers, and after supporting us by walking out we will be there to support you by raising up your voices.

Another student from MSD, Kyle Kashuv, who has been vocal in his support of gun rights had a different response.

We need to protect our kids. This is unacceptable! Both parties need to come together and pass school safety legislation. Stop the partisan hackery! #SantaFeHighSchool #GrassleyCruz

Gun free zones do NOT work!