Why The Wisconsin Republican Primary Rules Matter For Cruz and Trump 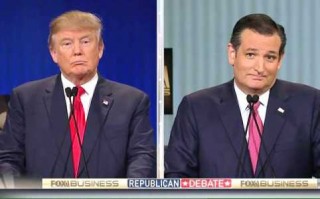 Ahead of today’s Wisconsin primary, Ted Cruz is hoping for a big win to give him the momentum he needs to push ahead of Donald Trump. He’s where we are at delegate-wise prior to today’s vote: Trump has 737 delegates, to Cruz’s 475. John Kasich trails behind with just 143 delegates. Pundits predict this race could determine whether or not the Republicans are headed to a contested convention. Polls in Wisconsin put Cruz ahead by about 10 percentage points, but if the recent past is any indication, anything could happen. So the Republican party rules in Wisconsin matter on this one a lot. There is one rule change for the Wisconsin 2016 primary election in particular that could have an impact on which delegates get picked to head to the Republican National Convention in Cleveland. Trump and Cruz both have massive efforts underway to ensure delegates are loyal to them — and don’t defect to another candidate in the case of a contested convention. That’s why they better pay attention to the rule change described below.

But first, how many delegates are up for grabs?

A subtle but important rule change:

University of Georgia lecturer and Republican rules expert Josh Putnam pointed out a subtle, but important rule change in how the delegates are picked. The new rule ultimately gives more power to Wisconsin party leaders to pick the delegates — as opposed to the campaigns. Putnam described the impact of the changes in his blog:

Before the 2016 primary, the Wisconsin rules call for the district party chair and the District Executive Committee to choose a list of possible delegate and alternate candidates. That happens without consultation with the candidates or their campaigns.

What is clear is that the candidates have lost some of the past influence they held in the selection process in Wisconsin before. Still, it should be noted that the candidates do have a right of final approval over the at-large delegates that are bound to them. Additionally, all Wisconsin delegates regardless of distinction have to file an affidavit with the state party that among things requires them to abide by the rules (most importantly that they are bound to a candidate).

What happens when the Republican delegates get to the convention?

As Putnam reports, the delegates are bound to vote for the primary winner at the convention until “released by the candidate or until the candidate to whom they are bound receives less than one-third of the vote in any roll call nomination.” Interestingly, that means, if say, Cruz receives less than a third of the vote, delegates can vote for another candidate – like Trump — in the second round of balloting. Also, there is not set procedure for releasing delegates. So things could get interesting if say, John Kasich, suddenly drops out.

Stay with LawNewz.com for the latest on how the Republican rules/law impacts the 2016.