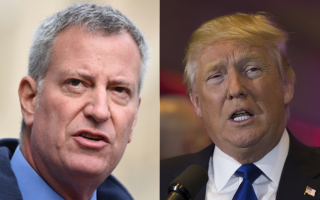 Last night began the first volley in what is bound to become an epic Twitter battle between Sean Spicer, President-Elect Trump’s press secretary, and Eric Phillips, NYC Mayor Bill de Blasio’s press secretary. Trump Tower was briefly evacuated yesterday, after a suspicious backpack was discovered. After the backpack was deemed harmless, Spicer tweeted out the following in appreciation for the NYPD’s service:

Back to work here at Trump Tower after a false alarm. Thanks NYPD

De Blasio’s staff, like many New Yorkers, are already less than pleased at the prospect of the monumental cost sure to result from Trump’s plan to split his time between the White House and Trump Tower. Phillips wasted no time in calling out Spicer on what form his “appreciation” should really take:

No problem. We’ll send you the bill. https://t.co/mxbUqzgHds

Instead of addressing the very real issue of who should bear the hefty cost (estimated at over $1 million a day) of Trump’s decision to bombard the NYPD with security-detail overtime for the next four years, Trump’s media director Dan Scavino Jr. got in on the action with a nasty (and awkwardly-written) ad hominem attack against Phillips.

Eric Phillips- Spokesperson for @NYCMayor @BilldeBlasio– you are an embarrassment to the @NYCMayorsOffice & the amazing #NYPD. https://t.co/kPX9go1gl4

Phillips isn’t letting it go, though. He responded by sticking to the issue:

Fighting over the financing of Trump’s dual residence is likely just warming up. While House Republicans passed a resolution that set aside $7 million (one fifth the amount Mayor de Blasio requested) to fund security costs for Trump’s transition, that budget won’t begin to cover costs accruing after January 20.

De Blasio has positioned his administration in opposition to basically everything for which the incoming Trump administration stands. Recently, at a speech at Cooper Union, de Blasio said:

Who will fund the enormous expense of securing Fifth Avenue remains to be seen, but one thing is certain. #AlwaysNewYork versus Trump is guaranteed to produce some great Twitter wars, and the battle of the press secretaries is just the opening salvo.