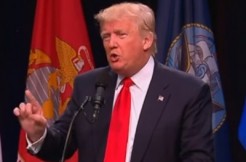 On Friday, Donald Trump said one of the most insincere things he’s said to date.

“The judge [Gonzalo Curiel], who happens to be, we believe, Mexican, which is great, I think that’s fine,” Trump a crowd of supporters in San Diego, California, according to The Los Angeles Times. “You know what? I think the Mexicans are going to end up loving Donald Trump when I give all these jobs, o.k.?”

He also called the judge a “hater.”

Curiel is presiding over a federal lawsuit that claims Trump’s now-defunct namesake school was a “fraudulent scheme.” In February, the presumptive Republican nominee for president said the Hispanic Curiel was biased against him on account of ethnicity.

Trump has said many incendiary things about Hispanics, Mexicans and Mexican-Americans in particular. This is not news. What’s news is that he’s now trying to court them for their support. That’s not gonna work. Tension has been there from the beginning of his campaign, when he said Mexican immigrants were rapists. He’s made similar statements several times after that.

It goes on. Plus, look at the tweets.

Sadly, the overwhelming amount of violent crime in our major cities is committed by blacks and hispanics-a tough subject-must be discussed.

My favorite is his quoting of a supporter, who made fun of Jeb Bush’s ability to speak Spanish.

“@YoungYoung54: @JeriHyatt @megynkelly @JebBush So true. Jeb Bush is crazy, who cares that he speaks Mexican, this is America, English !!”

But it’s Friday’s statement that’s probably the most interesting, as he flip flops between talking about a judge he hates, then says that “Mexicans” will love him. It’s an awkward statement, and it definitely won’t convince many people.

When Trump spoke Friday in San Diego, he said he’d do right by “Mexicans” and black people by improving job security and the economy. Would he commit to this if elected? Okay, I’ll play devil’s advocate, and mention that we’ve had at least one racist president who did pretty well by some people of color.

Democratic President Lyndon Johnson signed the 1964 Civil Rights Act into law, a powerful piece of legislation that protected black people. He also called Dr. Martin Luther King “’that goddamned n—-r preacher” after the reverend spoke against the war in Vietnam. Long before his time in the White House, Johnson spent many years as a lawmaker helping squash anti-racists bills. His major biographer, Robert Caro, doesn’t shy from depicting the former president as a political shapeshifter, someone who adopted beliefs when it most benefited him.

So if this man could occasionally do good things, maybe Trump can too. But I won’t bet on that. I won’t bet on a person on the off-chance he doesn’t mean a single thing he says. Not only are his actual statements garbage, but these statements attract the wrong kind of people.

Trump’s nationalist, macho bluster attracts his supporters like few things have. It’s even gotten him support from white supremacists like former KKK leader David Duke. This appeal to supremacists who cry about “white genocide” has been a refrain in media coverage of the campaign. But Trump has done a bad of distancing himself from racist supporters.

When initially asked about Duke’s support in February, Trump falsely pretended not to know much about him or the KKK. Let me repeat: a guy with a real shot of being president equivocated support from another guy who used to run a noted terrorist organization.

And yet Trump wants to shape legislation that affects millions of Hispanics? Yeah, buddy, good luck getting that Mexican vote.
–