The Truth About The Confusing Ohio Ballot Supposedly ‘Rigged Against Trump’ 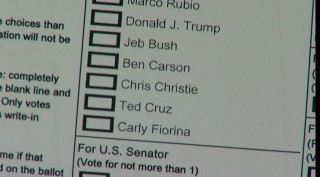 Editor’s Note: This article was first published on March 10, it has been updated ahead of today’s primaries.

A conspiracy of internet rumors are emerging that the GOP establishment somehow ‘rigged’ the Ohio Republican primary ballot to hurt Donald Trump in the upcoming election.  Today’s primary is considered a crucial race for Trump and his closest rival in that state — Ohio Governor John Kasich.

“The GOP has a history of manipulating the primary, but this time they are going all out to destroy Trump. Is it any wonder that Ohio’s ballot– which will be cast next week — is so confusing that Trump may lose votes just as a result of the ballot’s design,” a blogger wrote on the popular website zerohedge.com.  One story even had the headline, “You Won’t Believe What They Did to The Ohio Ballot To Stop Trump.” So I did some investigating on this — and while I agree the ballot is ridiculously confusing, it doesn’t appear this was intentionally done to hurt a particular candidate. That being said, it doesn’t mean that voters won’t be so puzzled that they end up voting for someone they didn’t intend to send to the Cleveland convention.

Basically, what happened is that the Ohio Republican Party changed the rules in 2015 to make the state a winner-take-all primary.  That means whoever wins gets all 66 delegates (instead of dividing them up among candidates). However, the state law apparently didn’t catch up with these new rules, and still requires the Ohio Secretary of State’s Office to print a ballot based upon on the old way of primary voting. Here is what the ballot looks like:

Okay, you see how there are two ways to vote for Donald Trump, Ted Cruz, Marco Rubio or John Kasich (and the rest of the candidates who dropped out). Well, only the top “delegate at large’ category will actually matter in tabulating who wins and which delegates go to the Cleveland convention. So, for example, if you want to vote for Trump, make sure you indicate so in the first category. The bottom selection doesn’t apply anymore.

“I found it kind of confusing because there’s two places to mark,” voter Kathy Pelley told Fox 8 Cleveland, “But I just figured you mark two places.”

“There is no truth to this somehow being rigged,” Josh Eck, the press secretary for the Ohio Secretary of State told LawNewz.com. And just in case, you don’t believe them, the State will still post the results from both categories.  Though, he said, “the vote for the delegate at large is what is going to have an impact on which Ohio delegates go to the convention.” Interestingly, though, the Democratic ballot in Ohio is far less confusing.

Jon Husted, the Ohio Secretary of State released this statement.

“How you get on the ballot is set by state law; how delegates are awarded is based on the bylaws of the Republican Party….  the Republican primary ballot appears the way that it has always appeared. This is set by state law…Traditionally, Ohio Republicans have awarded at-large delegates and awarded district delegates. So there were two contests on the ballot.. The Republican Party chairman has clarified that the rules for awarding delegates will be based on the winner of the at-large delegate contest. Both contests will be counted. But the awarding of delegates is based solely on the first question. “

The question is, could this change the outcome of the Ohio primary? Potentially. You can imagine a scenario where someone was hesitant on who to vote for, so they checked Cruz for the ‘delegate at large’ category and Trump for ‘district delegates and alternatives’ category. Under the new winner-take-all Republican Party rules, only their Cruz vote would count towards who goes to the convention. This was a definite oversight, but —  as for an intentional act to ‘rig’ the votes against Trump — I don’t think so.