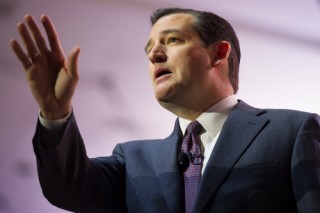 Months ago, before the Republican race was whittled down to just two candidates, a very curious thing happened. Ted Cruz‘s super PAC ‘donated’ $500,000 to Carly Fiorina‘s super PAC. A few articles popped up at the time, and the Federal Election Committee even issued a letter asking the Cruz super PAC to better explain what the donation was for.

To be clear, a half a million dollars is not a small donation, and, at the time, it was the largest expense that the PAC had paid out. So why the heck would Cruz’s PAC hand over that kind of money in the midst of a heated campaign splintered with so many candidates? In an interview in October,  Kellyanne Conway, president of Cruz’s PAC told CBS News, that they made the donation in June “because we thought she had important things to say that weren’t being heard.” She added, “we are all in for Ted Cruz for President.”

Do you seriously believe that a group that was pushing for Cruz to be president would want to help his rival, Carly Fiorina? That makes no sense. The reason that LawNewz.com uncovered in the Cruz PAC’s recently amended filings with the FEC raises even more questions.

“The failure of this super PAC to adequately describe the purpose of this transaction – undermines the public’s right to know,” Campaign Legal Center Executive Director Paul Ryan told LawNewz.com.

In the new filing, under the reason category instead of saying “other disbursement” like they had marked previously, Keep The Promise I (the name of the Cruz super PAC) amended the filing to say “transfer to IE only committee.” Uh? An “IE Only Committee” is legalese for “super PAC.”  What the Cruz super PAC means by “Transfer to IE Only Committee” is that it gave money to a different super PAC. Okay, well, thanks for amending the disclosure, but that still gives us no indication about what this money was used for, and why it was given to Cruz’s opponent.  And, in fact, legal experts believe that federal rules may require the super PAC to mark this as a donation not a transfer anyway.

“Even if this Cruz supporting super PAC describes the purpose (in their amended disclosures), that still doesn’t answer the why question — the motivation is what is interesting and intriguing,” Ryan said.

It is intriguing. I was prompted to research this particular donation because longtime Donald Trump friend and confidante Roger Stone brought it up in a recent interview, when he was addressing the National Enquirer article that accused Ted Cruz of having affairs with five different mistresses. (Something that Cruz has dismissed as ‘garbage’ and ‘lies’)

“And you have to wonder whether these women, one of whom worked for the Carly Fiorina campaign, and then shortly thereafter Ted Cruz pays Carly half a million dollars. Ted despises Carly, and Carly despises Ted. What is the $500,000 for? Can you say hush money?” Stone said in the interview. Stone, a longtime GOP political consultant, was the only one quoted ‘on the record’ for the Enquirer story. His claim definitely sounds like a conspiracy theory, but it’s now exploding on the internet. Plus, it wouldn’t be the first time a presidential candidate  used hush money to cover up an affair.

Of course, fast forward to now, Fiorina is backing Cruz in his campaign for presidency. Interestingly, Fiorina was recently out campaigning with him in Wisconsin when a Daily Mail reporter asked Cruz point blank about whether he had affairs. Fiorina quickly jumped in before Cruz could say a word.

“I’m going to comment. This is an example of the media playing to Donald Trump’s tune. Donald Trump is a serial philanderer, by his own admission,” Fiorina said.

Okay, so we have no idea if the two are connected, but we do know that it is very unusual for a Cruz-supporting PAC to give money to his opponent. We also know that the reason that the PAC stated in their amended disclosures is even more curious, and provides even fewer answers.

“This is very rare, I can’t recall another instance in which one super PAC contributed to another super PAC supporting an opponent, ” election law expert Paul Ryan said.

I emailed Cruz’s PAC Keep the Promise for further explanation, they pointed me back to their previous statements on the matter in which the executive director said that Keep the Promise I “supports Ted Cruz for President” but “will offer support to other candidates.”

Cruz’s campaign has not returned a call. We will continue digging to see if we can find out what this money was used for. But, as you know, the federal rules are pretty lax when it comes to requiring superPAC to make disclosures.