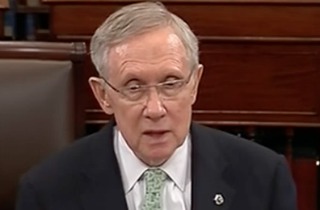 This weekend, we told you about Senator Chuck Grassley who basically suggested that someone from the FBI could leak the details of the Clinton investigation if politics gets in the way of an indictment. Well, U.S. Senate Democratic Leader Harry Reid fired back with a biting tweet.

The controversy surrounds comments Grassley made during a meeting on Friday which was first reported by The Des Moines Register.

Sen. Reid took Grassley to task again before Congress on Monday. Watch the video (via The Washington Free Beacon)

Here is what Sen. Reid said:

As each days passes, the Senior Senator from Iowa further distinguishes himself as as the most political and partisan judiciary chairman in history. Last Friday, Sen. Grassley took his political partisanship to a new level when he encouraged the FBI to join the political crusade against Hillary Clinton.

It is wrong for any Senator, especially the chair of the judicial committee who deals with these issues day after day to urge selective leaking of any federal investigation.

Despite insinuating there could be a leak, Grassley tried to make it clear that he was not actually encouraging the leak.