Schumer on Russia: ‘I Don’t Want This to Turn Into a Benghazi Investigation’ 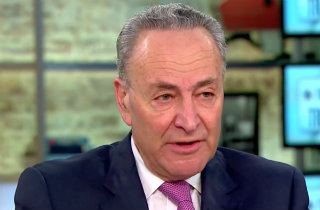 In light of Sunday’s announcement that the Senate Armed Services Committee is looking to conduct a bipartisan investigation into Russian hacking, Senator Chuck Schumer (D-New York), wants to make it clear just how important a bipartisan committee is. The incoming Senate Minority Leader appeared on CBS’s “CBS This Morning” on Monday with committee chairman Sen. John McCain (R-Arizona) and had a clear message: “I don’t want this to turn Into a Benghazi investigation.”

“It’s a very good committee. It works in a bipartisan way,” Schumer explained in more detail. “And look, we don’t want to point a finger. I don’t want this to turn into a Benghazi investigation, which seemed, at least to many people, highly political.This is serious stuff — when a foreign power tries to intervene to influence an election or damage our economy, for that matter. This is serious. It’s gotten worse and a bipartisan investigation that’s not aimed at one specific instance but looks at the broad scope of this is just what’s needed.”

As for why there would not be a specific target, Schumer said that “You have the CIA saying one thing — I haven’t gotten the briefing yet. The FBI something else. We need to get to the bottom of this in a fair, non-partisan, non-finger pointing way.”

Meanwhile, Mitch McConnell (R-Kentucky) is pushing for the Senate Intelligence Committee to initiate its own investigation into Russia’s role in disturbing the Presidential election, having made an announcement a few hours later during a news conference at the Capitol. “Obviously any foreign breach of our cybersecurity measures is disturbing, and I strongly condemn any such efforts,” McConnell said according to Talking Points Memo and other outlets in attendance. “It’s an important subject and we intend to review it on a bipartisan basis. The Russians are not our friends.”

That said, he was sure to point out that he felt the Senate Intelligence Committee could handle this and there was no need for a special committee to be formed. “We’re going to follow the regular order,” McConnell explained. “It’s an important subject and we intend to review it on a bipartisan basis.” McConnell also noted that Schumer is joining the committee. “Let me remind all of you that the Senate Intelligence Committee on which I and the chairman sit as ex-officio members, and Sen. Schumer will join us on the committee,” he added. “And he can review this matter through the regular order. I have every confidence in Chairman [Richard] Burr that he’ll review it in a responsible way.”

Meanwhile, back on CBS, McCain was careful in his wording when asked if he believed that the Russians’ intent really was to try to get Trump elected, saying that determining if it was is why we need a Senate investigation. “I can’t reach that conclusion yet, which is why we need a bipartisan effort to uncover the whole situation,” he said.

McCain did clarify that he has no doubt that Russia was behind the hacks, though. “There’s no doubt about the hacking; let’s establish that,” he said. “I was hacked into. My campaign, in 2008, was hacked into. So there’s no doubt about the hacking. Then the question is about the intention. But it’s all part of the larger issue of the cyber threat we face from Russia and China and other countries. It’s another form of warfare.”