Report: Trump University Lawsuits Close To Being Settled For $20 Million+ 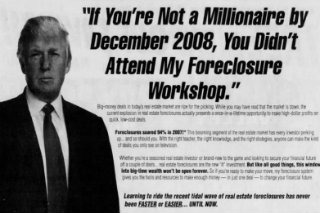 With just 10 days to go until the trial, President-elect Donald Trump may be settling the most high-profile and well-known lawsuits against him. The New York Daily news reported Friday morning (as did CNBC) that “a source with knowledge of the situation,” says that Trump has agreed to a settlement deal where he pays $20 million to $25 million to put the outstanding fraud lawsuits over his Trump University real estate courses to bed. This would include not just the Low v. Trump University case about to go to trial, but also the suit filed by New York State Attorney General Eric Schneiderman.

According to the Daily News’s source, Trump would not admit any wrongdoing as part of the deal, which “could be announced as soon as Friday,” meaning within hours of the report. The source referred to the deal as “a complete 180 by Trump” from previous offers, where he was refusing to pay more than a settlement in the low seven figures. The $20 million+ settlement will cover Trump University students/customers from both cases, which is less limiting than it sounds due to overlap between the lawsuits.

Eric Soufer, a spokesman for Schneiderman, wouldn’t get specific, but responded to the Daily News report with a statement saying that “as Attorney General Schneiderman has long said, he has always been open to a settlement that fairly compensates the many victims of Trump University who have been waiting years for a resolution.” Trump’s counsel was not immediately available for comment.

This news comes in the middle of both sides going back and forth over whether or not the trial should be delayed. The Trump side has been concerned about the presidential transition period needing his full attention, while the plaintiffs in the Low class action case countered that such an argument would be a slippery slope that could be used while Trump is president, as well.