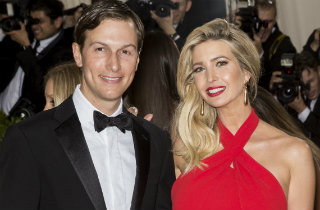 Before his father-in-law, Donald Trump, was elected President of the United States, Jared Kushner was already a public figure as the owner of the New York Observer, but the speculation about a role for him in the Trump presidency has him under the microscope even more. Case in point: Haaretz has pulled the tax records of the Charles and Seryl Kushner Foundation, which Jared sits on the board of with his siblings. They found some interesting donations. Most notably, the foundation has donated “tens of thousands of dollars” to groups in the West Bank settlements of Israel.

One of the groups that the Kushner Foundation donated to was American Friends of Beit El Yeshiva. Beit El Yeshiva itself is “located in one of the more hard-line, ideological settlements” according to left-leaning Haaretz. The Kushners donated $20,000 in 2013. David Friedman, Trump’s real estate lawyer and senior adviser on Israel affairs, is the president of American Friends of Beit El Yeshiva. He has also shown interest in being appointed U.S. Ambassador to Israel by Trump.

Other settlement organizations gifted money by the Kushner Foundation include: