Nope! Local Cops Are Shying Away From Immigrant Deportations 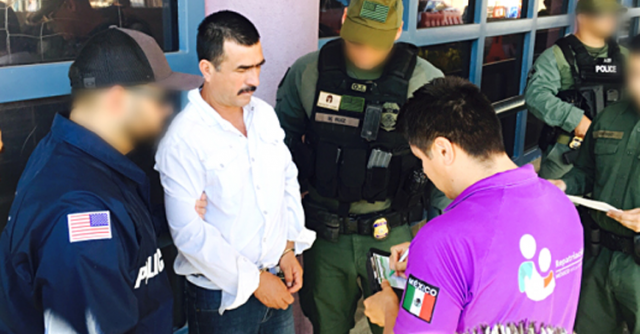 Only 37 local law enforcement agencies across the country are currently assisting U.S. Immigration and Customs Enforcement (ICE),  according to ICE records.

That’s a far cry from the 70-plus law enforcement agencies that signed ICE cooperation agreements deputizing officers to find and detain undocumented immigrants in 2009.

In a surprise move, Maricopa County (Arizona) Sheriff Paul Penzone announced on Feb. 18 that he was discontinuing his cooperation with ICE.  Penzone said he will no longer imprison some inmates for an extra 48 hours as a “courtesy hold” to allow ICE officials to seek detention or deportation of the inmates.

The Maricopa County Sheriff’s Office had been cooperating with ICE since 2007.

Penzone, who was elected last year to replace Trump ally Joe Arpaio, said he was ending the “courtesy hold” program in the jails because he had been advised by county attorneys about possible liability and legal costs if he kept the program.

“I have an obligation that this office act constitutionally and within the laws,” Penzone said at a news conference.

Thomas A. Saenz, leader of the Mexican American Legal Defense and Educational Fund, advised all local governments to “run swiftly” from the ICE deputization program.

Saenz said in a statement yesterday that deputizing local police as immigration agents will cause “victims and witnesses [to] withdraw from cooperation with police” and put localities in the crosshairs of “serious litigation and liability for the constitutional violations that follow from involving under-trained and inadequately supervised local officers in enforcing complicated federal immigration law.”

MALDEF and the American Civil Liberties Union sued the Maricopa Sheriff’s Office in 2007, alleging that  sheriff’s deputies were targeting Latinos in violation of the Fourteenth Amendment’s requirement for equal protection under the law, and arresting Latinos who turned out to be U.S. citizens or tourists in violation of the Fourth Amendment protection against unreasonable arrests.

Although Penzone did not mention any specific lawsuit as the cause of his withdrawal from the ICE program, his Maricopa County Sheriff’s Office was sued last year by an inmate who alleged that she imprisoned in jail overnight under an “courtesy hold” for ICE, even though she had been ordered released by a judge. The plaintiff, Jacinta Gonzalez Goodman, alleged that the jail’s ICE detainers were unconstitutional.

Penzone and his lawyers also may be thinking of the $54-million price tag for defending Arpaio in the 10-year-long class action lawsuit filed against him by MALDEF, the ACLU,and other groups alleging that Arpaio’s deportation tactics violated the constitutional rights of Latinos.

Another shift in the ICE program is the abandonment, at least for now, of the “street” enforcement program, which deputized local officers to conduct task forces, traffic stops, and other street sweeps looking for undocumented immigrants. None of the 37 localities have signed street enforcement agreements.

The street enforcement program was aggressively used by then-Sheriff Arpaio until the U.S. Justice Department alleged that Arpaio engaged in widespread unconstitutional arrests and detentions of Latinos.  In 2012, Homeland Security withdrew its agreement for Arpaio’s street program and limited Arpaio to “courtesy holds” in local jails for ICE.

ICE records show that the states with the largest number of undocumented immigrants are the least likely to sign up for ICE’s local law enforcement cooperation program.  According to the Pew Hispanic Center study in 2011, the five states with the largest percentage of undocumented immigrants are Nevada (7.2%), Texas (6.1%), California (6%), New Jersey (5.4%), and Arizona (4.9%).

Los Angeles Police Chief Charlie Beck, echoing the views by many local law enforcement officials, said that he will not enter into an agreement with ICE to enforce immigration laws because that his department’s’ main job is to solve  and prevent crime, and to do that, his officers must be trusted by crime victims and witnesses, or they will not call for help if they are worried about deportation.