No, Nevada Poll Workers Did Not Wear ‘Defeat Trump’ Shirts 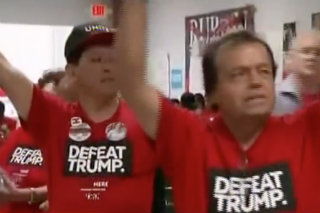 Throughout Election Day, one meme that has been popping up on social media and right-wing websites is that poll workers in Nevada were caught by CNN cameras wearing “Defeat Trump” t-shirts. Tweets like this one all used the same image from a genuine CNN broadcast:

#Rigged Election: #NevadaFraud It is unlawful inside a polling place or within 100 feet from the entrance to the building or other structure pic.twitter.com/8WSBb6xvox

Take a closer look at the CNN screen grab, though: The bottom right corner includes a countdown clock…to Election Day. With close to three days left on it. And no, the footage was not shot at any kind of early voting polling location, either. CNN’s Kyung Lah, who worked on the piece that the image was taken from, explained that the clip was actually shot at a Culinary Union 226 hall:

When searching the database of news archiving service TVEyes for the term “Culinary Union,” LawNewz could only find the segment on the more obscure CNN International feed, which may have made Trump supporters more prone to conspiracy theorizing if they hadn’t seen it on American CNN. As the clip shows, though, those are definitely Culinary Union 226 workers at their local union hall:

Lah even tweeted photos of the shirts when she shot the segment on Friday:

Wearing a candidate’s paraphernalia at a polling location is considering “passive electioneering” and is illegal in some jurisdictions for anyone there, not just poll workers. But that’s not what happened here. This was just a picture from a non-election event being passed off as something that it’s not.