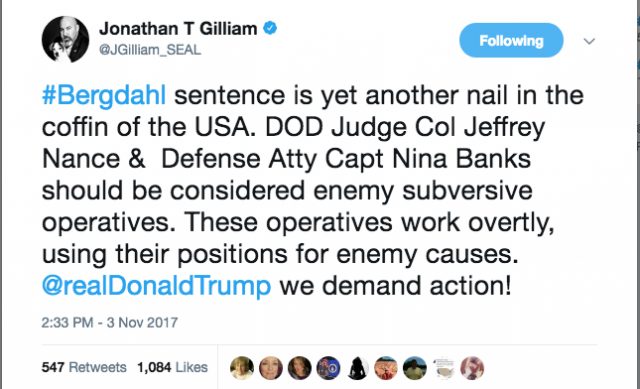 Former U.S. Army Sergeant Bowe Bergdahl has since been demoted to the rank of private and will soon walk away from military prison a free man.

Bergdahl’s sentence didn’t go over well with one retired Navy SEAL who accused the judge in the case of being an “enemy” and a “subversive operative” intent on destroying the United States of America from the inside out.

[The] #Bergdahl sentence is yet another nail in the coffin of the USA. DOD Judge Col [sic] Jeffrey Nance & Defense Atty Capt [sic] Nina Banks should be considered enemy subversive operatives. These operatives work overtly, using their positions for enemy causes.

Gilliam has been tweeting and talking about Bergdahl for some time. The retired SEAL is a right-wing author and commentator. Gilliam’s LinkedIn profile refers to himself as “a career public servant with over 20 years of service as a Navy SEAL, FBI Special Agent, Federal Air Marshal, Private Security Contractor, Police Officer, Public Speaker, [and] Expert Media Commentator.”

He lives in the New York City metropolitan area and recently published a book titled “Sheep No More: The Art Of Awareness And Attack Survival.” The cover of Gilliam’s book features a mirror image of the author–one in full color; the other in black and white. The dual visage conveys a sense of mystery set against the backdrop of a mutilated American flag.

His Twitter commentary typically focuses on the Clintons, Muslims, terrorism, allegedly “fake” conservatives and features spirited defenses of President Trump while extolling the virtues of movement media like NewsMax and figures like Sean Hannity.

Gilliam’s recent attacks on Department of Defense Judge and Army Corporal Jeffrey Nance and Bergdahl’s defense attorney Army Captain Nina Banks, however, appear to be a new line of commentary. A search of Gilliam’s tweets turns up only two references to either Nance or Banks. The first was in a poll tweet posted just before the one referring to Nance and Banks as enemy operatives.

It is, therefore, unclear whether Gilliam is categorizing two prominent members of the U.S. Army as foreign traitors wedded to the United States’ destruction or, rather, domestic traitors of the long march variety committed to motives ulterior.

Gilliam ended his original tweet with a plea to President Donald Trump. He wrote: “we demand action!”