Trump Administration Claims Humans Are Number One Cause Of Climate Change 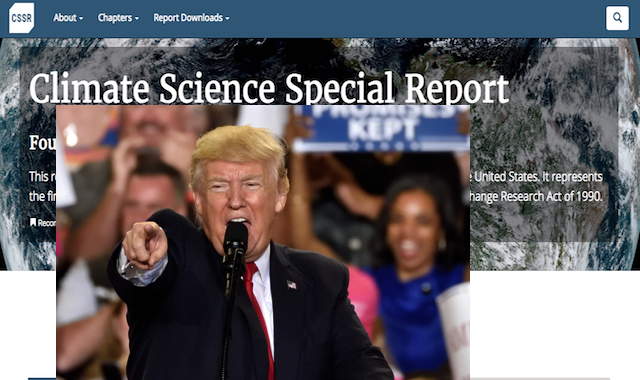 A report issued by the administration of U.S. President Donald Trump states unequivocally that human activity is the primary cause of increased surface temperatures over the past century. This increase in temperatures is commonly referred to as climate change.

Titled, “Climate Science Special Report,” the exhaustive document is the product of years worth of research by hundreds of scientists and experts affiliated with the agencies involved in its production. Those experts are culled from both the federal government and the broader scientific academy.

The report is the fourth such publication produced under the auspices of the National Climate Assessment. This document is put together every four years under the terms of the 1990 Global Change Research Act. It purports to be, “an authoritative assessment of the science of climate change, with a focus on the United States.”

The Executive Summary section of the report begins with an ominous declaration reflecting the consensus of the scientific community, “The climate of the United States is strongly connected to the changing global climate.”

The summary then goes on to note:

This assessment concludes, based on extensive evidence, that it is extremely likely that human activities, especially emissions of greenhouse gases, are the dominant cause of the observed warming since the mid-20th century. For the warming over the last century, there is no convincing alternative explanation supported by the extent of the observational evidence.

Citing the highest temperatures recorded on the planet in the last 115 years, the report notes, “This period is now the warmest in the history of modern civilization. The last few years have also seen record-breaking, climate-related weather extremes, and the last three years have been the warmest years on record for the globe. These trends are expected to continue over climate timescales.”

The report also cites the documented 7-8 inch rise in ocean levels since 1900 and states that nearly half–roughly 3 inches–of that rise has occurred since 1993 alone. Such rises are all-but certain to continue for the foreseeable future–with several inches of increase likely within the next 15 years alone and an overall rise of 1-4 feet by the year 2100.

The report says the 4 feet figure is a conservative estimate and that an eight-foot rise for the same timeline cannot be ruled out.

Summarizing the impact of climate change, the report goes on:

Such certain expressions of climate change’s role on Earth and its geography are decidedly surprising coming from the current U.S. administration. President Trump’s White House is staffed with high-level employees who oppose any action on climate change–and the report was apparently criticized by many such officials.

President Trump himself is famously skeptical of climate change. He once tweeted:

The concept of global warming was created by and for the Chinese in order to make U.S. manufacturing non-competitive.

The scientists won out, however, with the release of this report. According to a report in the New York Times, the White House didn’t want to battle with itself over climate change while they worked out the details of a planned tax reform bill.