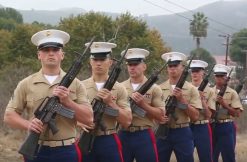 Active and retired members of the military have been showing far more support for Democratic presidential nominee Hillary Clinton than for her Republican rival, at least as measured by the checks they’ve written to her campaign.

Individuals who listed their employers as the U.S. Department of Defense or major branches of the military, or who say they’re retired from one of those, have contributed a total of $972,709 to both nominees so far this year. Clinton has claimed $771,471 of the contributions, or nearly 80 percent.

All major branches of the armed forces – including the Army, Air Force, Navy, Marine Corps and Coast Guard – have favored Clinton to a much greater degree than GOP nominee Donald Trump. Members of the Army have contributed more than other branches of the service this cycle, giving a total of $191,712 to the two presidential hopefuls, 72 percent of which went to Clinton.

Meanwhile, it’s the Air Force that has given the largest portion of its contributions to Trump, though it still favors Clinton by a lot. Trump received 39 percent of the $110,711 given to the two candidates by people connected to the Air Force.

(Our analysis includes donors giving more than $200; candidates don’t have to provide identifying information about smaller donors to the public.)

If this seems surprising, consider this: Up until the primaries were over, the military favorite was Sen. Bernie Sanders (D-Vt.), who received $374,600. Sen. Ted Cruz (R-Texas) came in a close third after Clinton.

“People assume the military leans Republican, but I think that has fundamentally changed in the 21st century,” retired Rear Adm. Jamie Barnett said.

Barnett, who has contributed $600 to the Clinton campaign so far this cycle, also said that since a single person in the Oval Office can commit the country to war, those in uniform are certainly willing to put some money on the line to help elect a leader they believe has the right skill set. “The last thing we want to see is our men and women in uniform going into a war we don’t need” due to ego, lack of judgment or some other personal flaw, Barnett added.

Retired members of the military seem particularly aghast at the thought of a Trump presidency, based on their contributions this cycle. Of the $135,392 that came from former service members so far, only 2 percent has gone to the brash businessman’s campaign.

Of course, history has shown that campaign contributions don’t necessarily reflect the results at the polls. Despite Obama’s victory in contributions from the military, 2012 Gallup data showed that veterans preferred Romney by 24 points over Obama.

Ramapo College Professor Jeremy Teigen, who studies military and politics, warned that while Clinton — and before her Obama — may be more popular with members of the military who donate to candidates, “that does not mirror the partisan voting tendencies of the military overall. We know, for instance, that the officer ranks trend substantially toward the GOP while the enlisted ranks trend less so but still toward Republicans.”

That Republican leaning has become more pronounced since the draft ended in the 1970s, Teigen said. “Now that the military is entirely self-selected, mostly male, and somewhat more likely to come from conservative social contexts, the men in the armed forces vote for Republican candidates and identify with the Republican Party more than not,” he said. (Teigen noted that less is known about the political leanings of women in the military.)

The New York Times reported on Thursday that veterans are turning to Trump, feeling abandoned by establishment politicians. Veterans featured in the story have called the nominee, “genuine,” and “a breath of fresh air.”

But University of Maryland Professor Emeritus David Segal said he’s seen more veterans against Trump than for him.

“Honestly, there’s not much enthusiasm for Clinton either, but veterans around me seem to have far less distaste for [Clinton] than Trump,” Segal said. “Trump does not value veterans, and in fact, insults families of veterans who have died in combat,” a reference to Trump’s tirades against the Khan family, who spoke at the Democratic National Convention in July.

Segal, who directs the Center for Research on Military Organization, said there are also concerns among military members that Trump is likely to get the U.S. into another war. He said Clinton, though somewhat hawkish herself, has a good understanding of working diplomacy, having served as secretary of state,
Earlier this year, Trump showed strong support for the use of nuclear weapons during a television interview, saying, “Somebody hits us within ISIS, you wouldn’t fight back with a nuke?” He continued, “Then why are we making them? Why do we make them?”

As different as the two candidates may seem, Trump and Clinton are actually fairly similar in the sense that both back strong defense spending. The GOP nominee has been vocal about spending extra dollars on the military, and according to Center for Strategic and International Studies’ estimates, Trump’s proposals would cost $640 billion per year, about $80 billion over President Obama administration’s projection.

“Trump talks about increasing the defense budget, but he’s not paying his taxes,” Segal said. He said it’s difficult for the Republican to win respect from military members when he’s not paying his fair share of the cost of what he’s proposing to spend.

The fate of the Budget Control Act of 2011, which severely restricts spending for various priorities including defense, will be key in determining whether Trump can actually implement his expensive proposals, but he hasn’t made his position clear on the budget cap through 2021 yet. Clinton, however, has implied support for repealing the budget restraint in her vague policy statement that supports “ending the sequester for both defense and non-defense spending in a balanced way.”

Written by Soo Rin Kim from Open Secrets, and submitted to LawNewz.com. Open Secrets is a non-partisan nonprofit organization which tracks money in U.S. politics.

[Screengrab of a training exercise via Marine YouTube page; use of this image isn’t meant to imply any political affiliation for the individuals shown]