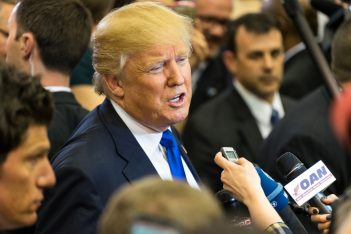 A federal judge ordered the Republican National Committee (RNC) to produce any agreements it has with the Trump Campaign to participate in “poll watching” or “ballot security” operations related to the upcoming election.

The order was issued by U.S. District Court John Vazquez in response to a motion filed last week by the Democratic National Committee that accused the RNC of voter intimidation and violating a longstanding consent decree.  The decree came about in 1981, after Republican officials allegedly engaged in intimidation tactics against minority voters in the name of “ballot security.” The decree barred the RNC from engaging in various polling-related activities.

An affidavit or affidavits by a person or persons with personal knowledge setting forth in detail Defendant’s efforts with the Trump Campaign to work with state governments and secretaries of state to ensure “ballot integrity” as indicated by Governor Mike Pence on or about August 3, 2016

An affidavit or affidavits by a person or persons with personal knowledge setting forth in detail Defendant’s efforts with the Trump Campaign to monitor precincts around the country as indicated by Kellyanne Conway on or about October 21, 2016.

However, Judge Vazquez evidently found that argument unpersuasive and gave the RNC until November 2 and 5:00 PM to comply with his latest order.