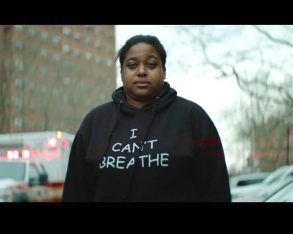 The daughter of Eric Garner, the man who died as NYPD officers attempted to arrest him for allegedly selling loose cigarettes, lashed out at Hillary Clinton’s campaign in a series of tweets on Thursday.  Erica Garner’s anger apparently stems from hacked emails revealed by Wikileaks that show internal campaign discussions about her father’s death.

What are they talking about here? https://t.co/tgQH2VxuHZ

Garner first tweeted a link to leaked emails that appear to show internal discussions from the Clinton campaign about whether to mention her father’s name in op-ed piece that Clinton was writing for the New York Daily News.

“Finally, I know we have Erica Garner issues but we don’t want to mention Eric at all? I can see her coming after us for leaving him out of the piece,” Clinton campaign aide Nick Merrill wrote.

Garner then proceeded to rip into the campaign over what she read.

These people will co opt anything to push their agenda. Police violence is not the same as gun violence.

Wouldnt yall like to know why the #Hillary campaign thought that I my objecting to them exploiting my dads death was a “problem” @mtaibbi https://t.co/i5cahlS6VZ

I’m troubled by the revelation that you and this campaign actually discussed “using” Eric Garner … Why would you want to “use” my dad?

The leaked email shows Clinton campaign aide Maya Harris responded to Merrill’s question and explained why Garner would not be included in the op-ed.

“Eric Garner not included because not killed by gun violence,” Harris wrote.

However, she would take one more shot at Clinton campaign chairman John Podesta before she was done.

Personelle equals policy @johnpodesta said that Eric Garner’s killing was justified . And this is who we want to hold our nose and vote for? https://t.co/5nWnjxA7Nq

And then, just a few hours ago, Garner promised to not let this issue just blow over.

This is not the first time Garner has been critical of Hillary Clinton and during the primary campaign she endorsed Bernie Sanders.