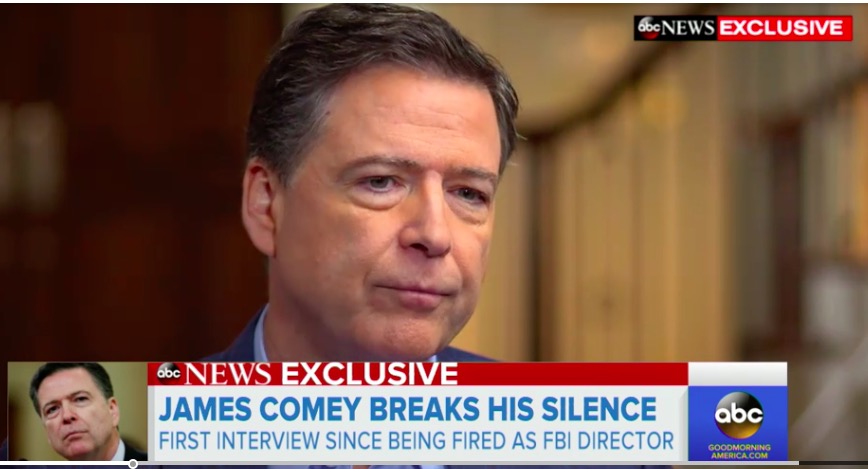 Last night, in James Comey‘s televised interview with George Stephanopoulos, the ousted FBI-director said mostly what we’ve heard before. Comey made those pre-election announcements about Hillary Clinton because he felt he had no choice, Trump asked him for inappropriate pledges of loyalty, and he found out he’d been fired by watching it on TV.  Media buzz aside, there really were no “bombshells” from the interview — but Comey did remind us who he is: an experienced federal prosecutor with a firm grasp on the law and its enforcement.

While recounting the now-famous story about the time when he rushed to former Attorney General John Ashcroft’s hospital bed to protect Ashcroft from being duped into signing false documents, Comey makes an important point about Robert Mueller. Comey said about the then-head of the FBI, “He and I weren’t close, we weren’t friends in any social sense.” Two points to Comey for helping his predecessor by distancing himself.

So seriously, in fact, that he doesn’t even tell his wife things. When George Stephanopoulos feigned incredulity: “You really can’t talk to your wife about the things you’re working on?” Comey replied:

“Yeah. It adds to your level of stress. …But as much as I loved her and as important as an advisor she’s been to me my whole life, she didn’t have a need to know anything about the classified topics I worked on. And she didn’t have the appropriate clearance. She’s an extraordinarily trustworthy person, but she doesn’t have the appropriate clearance.”

In other words, “most people might tell their wives things they shouldn’t but I’m not most people.”

Comey knows that some of the American public is not-so-psyched about his decision to have held press conferences about the FBI findings in Emailgate. But he also knows that in court, “statements against interest” – those things that have a tendency to make you look bad – are considered more credible. So Comey makes the smart choice to defend his actions by depicting himself as something of a martyr:

“I knew this would be terrible for me personally. I actually thought, as bad as this’ll be for me personally, this is my obligation, to protect the F.B.I. and the Justice Department. Given all that had gone on, the attorney general of the United States could not credibly announce this result. And if she did, it would do corrosive damage to the institutions of justice.”

Certainly, one can still criticize Comey for his past decisions; the explanation he offered, however, spins a lousy set of facts in the best way possible for Comey.

There is literally nothing lawyers love to do more than criticize each other for not being careful enough. Comey and Obama are no exceptions here:

JAMES COMEY: … we had the problem that President Obama had twice publicly basically said, “There’s no there, there.” In an interview with– on Fox, an interview on 60 Minutes I think, both times he said that. So that’s his Justice Department.

GEORGE STEPHANOPOULOS: Did that surprise you?

JAMES COMEY: It really did surprise me. He’s a very smart man and a lawyer. And so it surprised me. He shouldn’t have done it. It was inappropriate.

When pressed on his rationale for declaring Hillary Clinton “extremely careless,” – Comey pointed out that he’d done so for a good legal reason. In Comey’s original draft statement, he’d used the term, “gross negligence,” but changed it specifically to avoid making a legal conclusion. Instead, Comey went with what he called “a colloquial way to explain it,” and chose, “extremely careless,” because those words have no specific legal meaning. This way, he conveyed the idea that what Clinton had done was worse than an ordinary mistake, but not as bad as but not criminal behavior – but he did so without making an official legal finding. Clever, huh?

Donald Trump has denied, ad nauseam, any “collusion.” Comey is here to let us know that “collusion” isn’t even a legal thing.

JAMES COMEY: We hear the word “collusion” all the time. “Collusion” is not a word that’s familiar to me from my work. The question is, is anybody conspiring or aiding and abetting, helping, the Russians accomplish their goal of interfering in the American election?

In other words, “Trump doesn’t even know which thing he’s supposed to be denying. Leave the law enforcement to the people who actually know what the law says.”

Comey said that failing to tell the public that the investigation had been reopened would have constituted, “an affirmative act of concealment,” that would have constituted an actus reus as far as he was concerned. In Comey’s words, “you could speak about it, or you could not speak about it. But the not speaking about it is an action…concealment can and often is a crime.” In those terms, it is kind of tough to argue with the then-director’s logic.

When discussing the instructions Loretta Lynch gave him about handling the Clinton investigation, Comey said:

I mean it’s not quite, “Unit. Corps. God. Country.” – but the message is clear. He didn’t operate in a vacuum, and if there is music for him to face, he’ll be bringing others to face it alongside him.

In one move, Comey reminded the world that he’s a pretty experienced federal prosecutor and demonstrated that he knows exactly how defamation law works. Comey compared the Trump environment to “La Cosa Nostra,” — the Sicilian Mafia, but immediately clarified that Trump isn’t actually out there “breaking legs” or “shaking down shopkeepers.”  As a federal prosecutor who actually prosecuted mob crimes, that comparison isn’t one to be taken lightly.  The fact that he did so while keeping the language free of anything that could amount to defamation is pretty perfect.

10. He comes down hardest when he’s talking about verifiable facts.

Comey made lots of statements criticizing President Trump, including calling him “morally unfit” to serve as president. Because those are statements of opinion, Comey could never be liable for defamation for having made them. But if Comey made statements of fact about Trump, the aperture for liability opens a little. That’s likely why Comey only called out Trump specifically for lying about things that are clearly verifiable – making fun of the reporter, the size of his inaugural crowd, and remarks about what “everyone” thinks. These are the only times when Comey’s words aren’t couched in the words of opinion, and he points out that very distinction:

Prosecutors are virtuosi in the art of pointing out the way in which a person’s own statements can condemn him. Comey is no exception. When talking about the Russia prostitute-and-pee-allegations, he tells George:

“I remember thinking, ‘How could your wife think there’s a 1 percent chance you were with prostitutes peeing on each other in Moscow?; I’m a flawed human being, but there is literally zero chance that my wife would think that was true. So what kind of marriage to what kind of man does your wife think there’s only a 99 percent chance you didn’t do that?'”