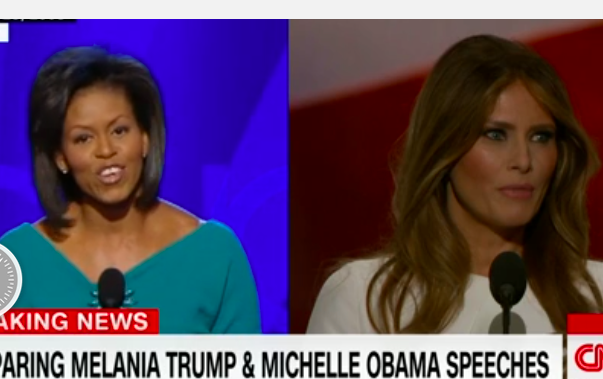 While I can’t imagine Mrs. O would ever actually pursue such a claim, lets explore how she could if she were so inclined.

Artists, authors, speakers, and songwriters always own an automatic copyright in the works they create. They can then choose to register that copyright with the U.S. Copyright Office; while doing so makes enforcing that copyright easier for the artist, registration isn’t strictly necessary. When someone copies all or some of a copyrighted work without permission, that person may have “infringed” on the original artist’s copyright.

Copyrights don’t last forever, though. Under current law, a person making a speech today would own the copyright for his or her lifetime, plus another 70 years. After that, the text of the speech becomes part of the public domain, and anyone can copy it without legal consequences. When it comes to speeches written or given by employees of the federal government, things are different; under federal law, those speeches are part of the public domain, right from the start. The same goes for any government-produced materials that appear on the White House webpage, on which the text of many speeches is often posted.

As First Lady, Michelle Obama is not an official federal employee, and therefore, she is entitled to the same copyright protection that any other American citizen has. Back in 2008, Mrs. Obama wasn’t even the First Lady, so there’s no question that she was the sole copyright owner of the text of any speech she delivered (even if a speechwriter had penned the speech, it would have been a “work-for-hire,” making the copyright Michelle’s). Under the law, there’s little question that Michelle Obama is the copyright holder of the text of her 2008 convention speech. The remaining issues would be: 1) whether Melania Trump plagiarized enough of Mrs. Obama’s speech to constitute “copying” under federal law; and 2) whether Mrs. Obama suffered damages as a result of any copying.

Assessing whether a work is “copied” can be a complex and confusing endeavor. Copyright courts apply various tests, which are ever-evolving and never simple. A conclusion of a work’s having been derived from a copyrighted source often boils down to the general feel of whether that work is too close to the original. And that brings us to Melania Trump. Whether or not we believe Paul Manafort’s statement that “to think that she’d be cribbing Michelle Obama’s words is crazy,” or the Trump campaign’s statement that the speech “reflected [Melania’s] own thinking,” the similarities are indisputably striking. Manafort’s feigned shock at the Twitterstorm over plagiarism and his argument that Melania’s speech had simply used “words that are common words,” is plainly not believable. The immediate and overwhelming public reaction to the sameness of the two speeches is independently significant in the context of a copyright claim, because copyright analysis often hinges on whether the general public would perceive two works as being the same.

There is plenty of precedent for the copyright protection of a speech – even a very famous speech. The estate of the late Dr. Martin Luther King, Jr., is known for being particularly litigious in protecting its rights in Dr. King’s famous “I Have a Dream” speech – which is why it’s unusual to hear more than a few lines of the speech replayed. While Michelle Obama’s 2008 convention address was clearly not as renowned as King’s speech, it is just as entitled to copyright protection.

Melania’s best defense against any claim of copyright infringement isn’t about the copying – it’s about the money. For Michelle Obama to successfully bring such a claim, she’d need to prove that she suffered financial damages from any copying. That part would be far from easy. Unlike the copying of song lyrics or the republishing of a poem or book, the copying of a speech may not give rise to quantifiable damages. That being the case, I guess we’ll have to be satisfied with the knowledge that Melania Trump would have failed everything from law school to high school history after cloning a speech from her rival.