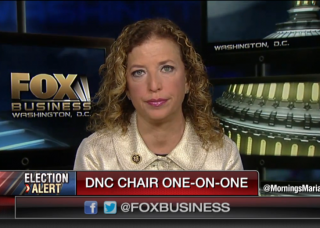 In an interview with Fox Business, Democratic National Committee chair Rep. Debbie Wasserman Schultz addressed accusations made by the Bernie Sanders campaign regarding fundraising. The Sanders camp alleged that Hillary Clinton violated campaign finance law through her use of joint fundraising committees (JFC’s). They claim that the JFC’s, which are supposed to coordinate funds for the Clinton campaign, the DNC, and state committees, improperly gave money to Clinton.

Wasserman Schultz responded to these allegations by saying that Clinton does not benefit unfairly. She said there is nothing different between Clinton’s joint fundraising agreement and the ones that the DNC has had with previous Presidential candidates.

“Senator Sanders has chosen not to exercise the use of his joint fundraising agreement, but we have absolutely no violations and we are running the joint victory fund with the Clinton campaign exactly according to the way we are supposed to,” she said.