Despite Trump’s ‘Collusion’ Accusation, Cruz and Kasich Are Doing Nothing Illegal 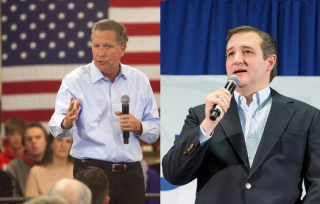 Republican front-runner Donald Trump tweeted on Monday that rivals Ted Cruz and John Kasich are engaging in “collusion” to take him down.

Lyin’ Ted Cruz and 1 for 38 Kasich are unable to beat me on their own so they have to team up (collusion) in a two on one. Shows weakness!

Those are strong words, and they really don’t apply here. Collusion implies that there’s something illegal or at least deceptive going on. First of all, it’s certainly not deceptive, as both the Cruz and Kasich camps are acknowledging that they’ve each chosen to focus on certain states, while letting the other candidate campaign in others.

As far as illegal? Not even close. LawNewz.com spoke to Lawrence Noble, general counsel at the Campaign Legal Center, who said that as long as Cruz and Kasich don’t actually give illegal contributions to each other, they should be fine. That doesn’t have to be an actual donation though. If, for example, Cruz took out an ad in Oregon encouraging his supporters to vote for Kasich, and such an ad was part of an agreement between the two candidates, that could be considered an illegal contribution. But there is no evidence — and Trump isn’t even claiming there is evidence — that this is going on. All Cruz and Kasich are doing, as far as we know, is choosing not to campaign in some states, while focusing their efforts on others.

What Trump is doing is playing the victim by trying to turn this into a two-on-one battle. But make no mistake about it, Cruz and Kasich are hardly teammates here. Each one of them is trying to use the other as a chess piece so they can ultimately get the nomination at the Republican National Convention. They both recognize that they have a better opportunity to win some states than others, so Cruz will campaign more heavily in some states, hoping that Kasich can win the others, and vice-versa. But if that strategy works, as soon as the last primary ends, they’ll be at each other’s throats. That’s hardly collusion, it’s just strategy.