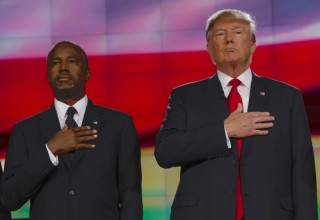 A watchdog group filed a complaint with the Department of Justice, alleging that Republican Presidential front-runner Donald Trump may have violated federal law by promising Ben Carson a position in exchange for his support. In a letter to the DOJ dated March 29, the American Democracy Legal Fund (ADLF), cites an interview that Carson gave to Newsmax TV on March 14, three days after publicly endorsing Trump for President.

The ADLF was established by Hillary Clinton supporter David Brock, and describes itself on its website as “a group established to hold candidates for office accountable for possible ethics and/or legal violations,” argues that this is a violation of 18 U.S. Code Section 599. That statute says:

This is far from an airtight case against Trump. While Carson’s comments indicate that he may assist Trump in some capacity, he didn’t say that he was offered any kind of public office. He didn’t give any real details about how he and Trump would be working together, nor did he say that there were any details to reveal in the first place.

Rick Hasen, a professor at the University of California-Irvine School of Law, doesn’t think this complaint is serious at all. He likens this to a similar situation where the Obama administration had President Bill Clinton try to dissuade Joe Sestak from running for Senate by offering him an unpaid advisory position. That situation, which Hasen called “silly,” ended up being a non-issue, as Sestak ran for Senate anyway, and lost.