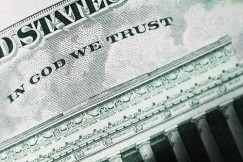 The small town of Saluda, North Carolina recently denied a request to add “In God We Trust” to its city hall building, and now the unending separation of church and state debate has found a temporary new home.

In Polk County, where city officials are preparing to apply “In God We Trust” stickers to patrol cars, and inscribe “In God We Trust” on government offices, six residents spoke up to make sure the controversial motto had no place at Saluda’s City Hall.

The Saluda Board of Commissioners unanimously denied a resident request to add the four-word religious phrase on both Saluda City Hall and Saluda’s police department. Six residents spoke up during the public comment period and, surprisingly, all spoke out against including the words.

Ellen Rogers, a Saluda resident, said what atheists and agnostics have been claiming for years: “In God We Trust” declares Christianity to be the selected religion of the United States. “As you well know the people of the United States and of Saluda are not made up of merely Christians,” Rogers said. “We are a far more spiritually diverse community of Atheists, Buddhists, Jews, Agnostics and Christians to name a few.”

Rogers went on to invoke the little-known history of the phrase “In God We Trust.” “Saluda need not adopt a motto that was created in fearful reaction to communism,” Rogers said during public comment. “Is that really the style of government we want?” Rogers was referring to the checkered history of the phrase. In 1956, the U.S. was engaged in tense Cold War relations. As a result the U.S. wanted to distinguish itself from the Soviet Union, which promoted secular practice and state atheism. Consequently, the 84th Congress passed a joint resolution which declared “IN GOD WE TRUST the national motto of the United States.” Ever since, separation of church and state advocates have pushed for the removal of the motto, often citing the Establishment Clause.

Congress shall make no law respecting an establishment of religion, or prohibiting the free exercise thereof…

While these types of debates have permeated small towns and counties all across the U.S., interestingly, the little town of Saluda’s decision not to include the motto is consistent with a new trend: an increase in non-religious Americans.