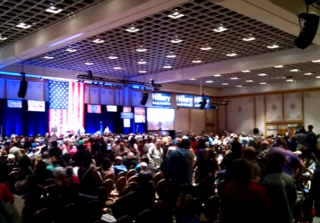 Supporters of Democratic Presidential candidate Bernie Sanders protested the party’s state convention in Nevada on Saturday, amid controversy over how the delegate selection process was conducted, and who was allowed to participate. Sanders had 1,662 delegates to the state convention in attendance, just shy of Hillary Clinton’s 1,693 supporters, but multiple reports indicate that 64 Sanders supporters were denied entry, which would have more than made up for the difference.

The Hill reported that the 64 Sanders supporters were barred because their personal information could not be located, or because they were supposedly not registered as Democrats by the May 1 deadline. Eight of them were eventually seated and able to participate, but the other 56 were excluded without having the opportunity to be heard or give proof of eligibility.

A minority report articulating challenge to the exclusions was read at the convention, but in the end, nothing was done about it.
Convention Chair Roberta Lange decided to close the convention after a “yea” or “nay” vote, much to the ire of those in attendance. She then closed the proceedings and left the stage. Chaos broke out, as seen in the videos below. Warning: strong language was used by some in attendance.


Police and security for the Paris Hotel in Las Vegas, where the event took place, eventually came in to maintain order.

@rlange9 Run away and let the brown shirts handle it. This is not how American democracy works! #nvdemconvention pic.twitter.com/gxphWOomF6

That didn’t stop protesters from staging a sit-in, with many remaining until after the lights were turned out at the venue.

The official result of the convention was that Clinton received seven of the 12 delegates up for grabs, with five going to Sanders.