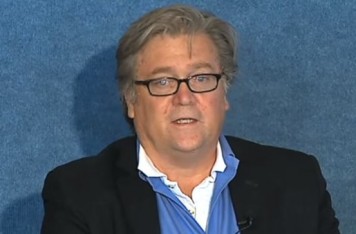 This morning, The Guardian had an exclusive report saying that Trump campaign CEO Steve Bannon is registered to vote in Florida, despite not actually living in Florida. They even called it an “apparent violation of crucial swing state’s election law.” But apparently, some critics have pointed to problems with the story. As Politico‘s senior writer, Marc Caputo, discovered, Bannon never actually voted in Miami-Dade county. Caputo called it a “bull*** story.”

The Guardian reported that Bannon had an active voter registration in Miami-Dade County. Their investigation found that the house on the registration was vacant and due to be demolished. The article said Bannon may have violated the law because he registered with false information. Guardian writer Jon Swaine is sticking by his story, and fired back at Caputo this morning:

However, Caputo replied that that is “hypertechnical flyspecking, not a clean hit.” And, in fact, there is some evidence that Bannon may have, in fact, lived at the Miami-Dade County home at some point. Conservative commentator A.J. Delgado tweeted this:

And I know the house since I visited Bannon there several times… BC HE WAS LIVING THERE.
Fools, @Guardian.https://t.co/EQWciuw1My

Election law expert Rick Hasen, who has been notably critical of the Donald Trump campaign lately, even contends that the allegations of voter fraud just don’t seem to add up. He said in blog post “this looks like much ado about nothing”

.@MarcACaputo I’m ready to agree w your “bullshit” call on Bannon voter fraud story.We can now go back to discussng his domestic violence

According to The Guardian‘s report, Bannon and Trump’s campaign declined to answer “detailed questions about Bannon’s voting arrangements.” A spokesperson told the publication: “Mr Bannon moved to another location in Florida.”