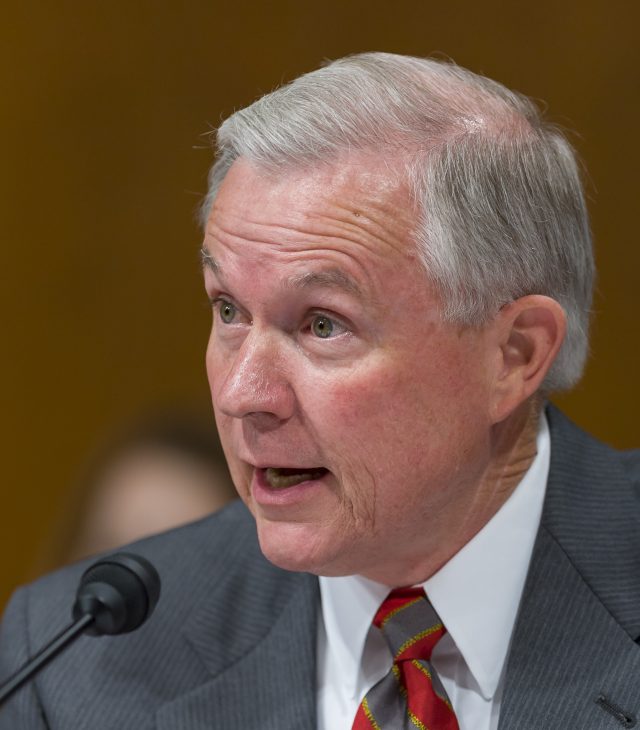 During an Oval Office ceremony, Trump called Sessions a man of integrity and principal, and someone who has devoted his life to the cause of justice.

Sessions was sworn in the morning after the Senate confirmed his nomination following a contentious confirmation process. The Alabama lawmaker resigned his Senate seat shortly after his colleagues approved him on a 52-47 vote that broke largely along partisan lines.

Sessions was the first sitting U.S. senator to endorse Trump. He faced criticism from Democrats over his record on civil rights and immigration.

Republicans lauded his four decades of public service and his commitment to fairness and the rule of law.

President Donald Trump is signing three executive actions related to criminal justice, including an order to have the Justice Department and the Department of Homeland Security to tackle “criminal cartels” that have spread across the nation.

The New York Democrat says Neil Gorsuch made the remark when they met privately Tuesday. It is remarkable for a president’s nominee to chide him.

On Wednesday, Connecticut Democratic Sen. Richard Blumenthal said Gorsuch told him Trump’s criticisms of the judiciary were “demoralizing and disheartening.”

Trump tweeted Thursday that Blumenthal “misrepresents” what Gorsuch said. Trump offered no reason for his claim.

Conway tells Fox News that Trump is a “successful businesswoman” and people should give the company their business.

President Donald Trump launched a Twitter attack against Nordstrom on Wednesday after the Seattle-based retailer dropped his daughter’s clothing and accessory line. Trump says his daughter has been treated “so unfairly.”

Trump has tweeted about companies such as Boeing, Carrier and General Motors. But ethics experts say this time is different because it involves a business run by his daughter — and that raises conflict-of-interest concerns.

Trump tweeted Thursday that McCain “should not be talking about the success or failure of a mission to the media. Only emboldens the enemy!”

He added that McCain has “been losing so long he doesn’t know how to win anymore, just look at the mess our country is in — bogged down in conflict all over the place.”

McCain is a Vietnam veteran and former prisoner of war who lost the 2008 presidential election to President Barack Obama. The Arizona senator won re-election in November.

McCain said Wednesday that any operation where a $75 million airplane is lost, a Navy SEAL is killed, and there are multiple casualties, including women and children, “cannot be labeled a success.”

An adviser to President Donald Trump says the president is “fully confident” in his Supreme Court nominee.

Kellyanne Conway said Thursday on “Fox and Friends” that Trump wants judges “to express their own independence,” after his extended criticism of the judiciary prompted a rebuke from Judge Neil Gorsuch, his pick for the Supreme Court.

Conway echoed comments made earlier by Trump, casting doubt on the credibility of Connecticut Democratic Sen. Richard Blumenthal, who first relayed remarks Gorsuch that Trump’s criticism of the judiciary is “demoralizing and disheartening.”

Trump’s own confirmation team for Gorsuch later confirmed the comments.

Conway said that “the judge has been misrepresented.”

She said, “Blumenthal has had a credibility problem” after inaccurately saying he’d served in Vietnam. Blumenthal apologized for his misstatements in 2010

A Republican former senator confirms comments by the president’s Supreme Court nominee, though the president suggests those comments were misrepresented.

GOP former Sen. Kelly Ayotte is helping with Gorsuch’s confirmation and was at the meeting.

She issued a statement saying Gorsuch made clear he was not referring to any specific case. But she said the nominee said he finds any criticism of a judge’s integrity and independence to be “disheartening and demoralizing.”

But Trump tweeted Thursday, “Richard Blumenthal, who never fought in Vietnam when he said for years he had (major lie), now misrepresents what Judge Gorsuch told him?”

Blumenthal faced criticism in the past for saying he had served in Vietnam. Blumenthal served in the Marine Corps Reserves during Vietnam. He apologized in 2010, saying he regretted his misstatements.

President Donald Trump’s extended criticism of the judiciary has prompted a rebuke from his nominee for the Supreme Court, who told a senator the president’s comments were “demoralizing and disheartening.”

Judge Neil Gorsuch, who was nominated by Trump to the nation’s high court last week, made the comments Wednesday after Trump accused an appellate court considering his immigration and refugee executive order of being “so political.” During the weekend, the president labeled a judge who ruled on his executive order a “so-called judge” and referred to the ruling as “ridiculous.”

Gorsuch’s comments came at the end of his first full week of meetings in the Senate, which is considering his nomination.