Black Inmate Choked By Texas Deputies After Smiling For Mugshot 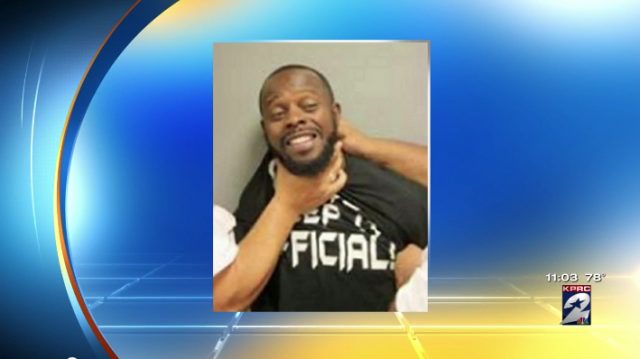 A black man in Texas was reportedly choked by white deputies because he smiled for his mugshot.

Johnson says that during his initial booking multiple sheriff’s deputies verbally insulted him and then forced their hands around his neck and began to choke him for roughly 30 seconds after he smiled for his booking photo.

Johnson’s official mugshot appears to corroborate his version of events. In the picture, two white sets of hands can be seen clasped around Johnson’s face.

According to Johnson’s lawsuit, three deputies in question restrained him, while a fourth took the mugshot.

Johnson also claims that jail staff berated and ridiculed him for his levity after the arrest. Johnson’s attorney, Andre Evans, said:

He was choked, in front of a room full of people, for smiling. That’s very humiliating. What took place at the Harris County jail that night was a clear violation of my client’s first amendment free speech rights as well as a childish show of excessive force.

Johnson’s legal team also claims that he suffered significant pain and mental anguish from the alleged attack. In the lawsuit, Johnson notes that one sheriff’s deputy repeatedly shouted at him, “Man, stop smiling! Man, take the picture right.” before the choking occurred. According to Johnson, he replied, “What are you talking about? This is how I always take my pictures.”

Then, in response to Johnson’s protest, one of the deputies allegedly said, “Well, I’ll tell you what, if you don’t stop smiling, we’re going to make you stop smiling.”

The Harris County Sheriff’s Office is standing by their deputies and disputes Johnson’s version of the events on the night in question. They released a statement, which reads:

The Harris County Sheriff’s Office believes that proper procedure was followed during the course of Mr. Johnson’s booking. Should any evidence arise to the contrary, proper administrative actions will be taken. At this time, evidence suggests that Mr. Johnson’s pleading does not hold merit.