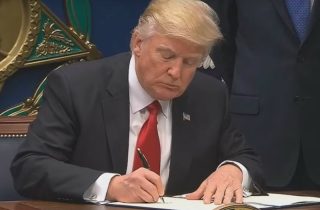 Faced with a number of federal district court judges – not to mention a unanimous federal court of appeals – which stayed his original controversial executive order governing immigration, President Donald Trump has wisely followed the suggestion made by me, my law-professor colleague Alan Dershowitz, and several others.

Even though we all agree that at least part of the order would be constitutional under current legal precedents, we suggested that Trump not continue an uphill battle through the court system to try to vindicate it.  Instead, we argued that he should more carefully craft a new executive order; one re-written so as to avoid, in so far as possible, the legal problems various judges found with his original order.

Trump has agreed to do this, but insiders are indicating that his team may not yet have learned their lesson. The current draft reportedly contains a flaw which, by itself or in combination with other concerns, may again torpedo (or at least substantially delay) his efforts to reform what he asserts is an immigration policy which presents unacceptable risks that at least some of those admitted will be terrorists.

While everyone agrees that any new rewritten order, no matter how carefully crafted, will be challenged in court by his opponents, it makes no sense not to correct a glaring problem – a problem which persuaded at least one judge to stay the executive order, and was probably a factor in similar decisions by other judges – if it can be done easily.  It can!

To begin with, some of the major problem with the original executive order reportedly have been corrected. As I as well as other legal observers suggested, the re-draft reportedly exempts green-card holders and those who already have visas. – two major problem areas for the judges.

However, it still singles out the same seven countries, all Muslim-majority nations, thereby preserving if not strengthening a legal argument which persuaded one federal judge, and apparently affected others: that the ban targets Muslims, and therefore illegally discriminates on the basis of religion.

Adding even one non-Muslim country – for example North Korea – would significantly help to undercut the argument that the order is an anti-Muslim ban.  It’s a very simple thing to do, and there is ample precedent.

For example, at one point the Transportation Security Administration [TSA] issued a directive which automatically singled out for secondary screening all persons with passports from twelve countries.  These included not only Muslim-majority countries, but also two non-Muslim countries: Cuba and North Korea.

Similarly, the National Security Entry-Exit Registration System [NSEERS], which was initiated in 2002 as a direct response to an unprecedented terrorist attack on the U.S. by Muslims for religious reasons, likewise applied to at least one non-Muslim country.  Under the program, citizens from 25 countries were required, if they were male, to register upon entering the U.S., and to periodically report for re-registering.

Surely, in addition to listing seven Muslim-majority countries to which the order now applies, the administration could add at least one or two more as a powerful step and important gesture towards showing that it is not just Muslims and Muslim nations which are being targeted.

For example, North Korea, which was included in both the TSA order and the NSEERS program, is not a Muslim-majority nation, and there are many reasons why we would want to restrict immigration from that country.

Also, one of the justifications offered for singling out the seven named Muslim-majority countries, and not including others such as Saudi Arabia, is that the governmental offices and record keeping in the seven was so disorganized that the U.S. could not reliably determine even the identities of those seeking to come to our country, much less reliably vet them for possible terrorist ties.

But exactly the same could be said for many war torn African countries such as South Sudan and the Central African Republic, where Muslims constitute only a small minority.  Including them in the new re-written executive order would make a great deal of sense based upon the administration’s stated rational: difficulty in vetting.  It would also not be a major blow to our tourist economy, not is it likely to outrage many in this country or abroad..

This would avoid many legal complications such as those created by former New York mayor Rudy Giuliani who said President Trump wanted a “Muslim ban,” and requested he assemble a commission to show him “the right way to do it legally.”

But if he and other non-governmental people are excluded from the re-drafting process, his statements would not be directly relevant.

It would also be harder for opponents of any new executive order to seek to question under oath any government employees who participated in the new drafting to help show such an anti-Muslim bias, especially if no non-governmental personnel were involved to undercut arguments of executive privilege.

So, if Trump wants to have to best shot – not necessarily a slam dunk or a clear win – in asserting his authority as president to limit immigration in response to what he believe are serious terrorist threats, he should do everything possible to avoid any possible weaknesses.

One would be trying to avoid re-litigating the policy behind limiting the order to seven Muslim-majority countries by adding a few more.  The other would be to avoid the embarrassment and counterproductive testimony non-governmental people such as Giuliani can create if they participate in the re-drafting.