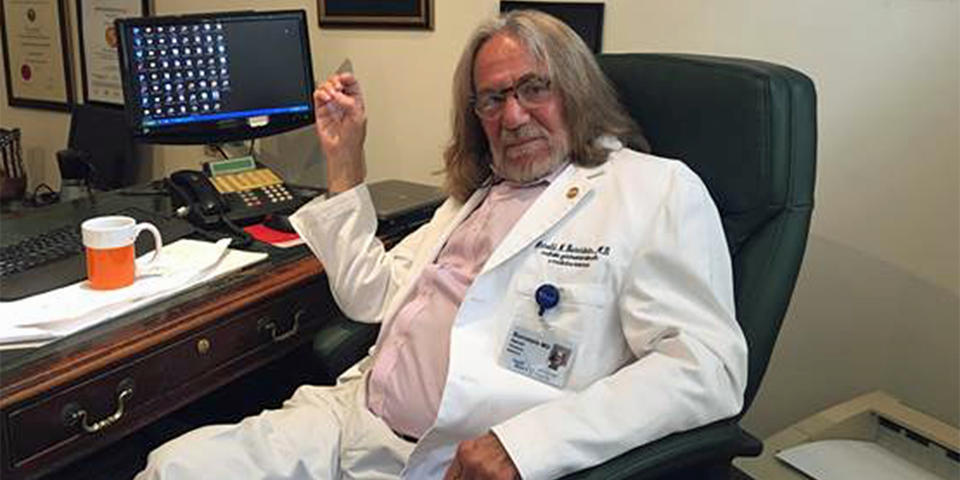 On Tuesday night, Trump doc Harold Bornstein (you know, that guy) broke the “news” on CNN  that Trump had actually dictated this letter in its entirety.

“He dictated that whole letter. I didn’t write that letter,” Bernstein said in an interview with CNN. “I just made it up as I went along.”

Bornstein’s revelation is hardly surprising to anyone who actually read the 2015 letter. Doctors usually don’t call lab test results “astonishingly excellent”; they usually stick with that whole “positive/negative” or “normal/abnormal” lingo. They don’t attest to a patient’s never having used alcohol or tobacco. And they sure as hell don’t compare the health of their current patients to that of 44 other people, most of who are already dead. Everyone paying attention had to assume this hyperbolic word soup came directly from the mouth of Trump himself. Still, it’s curious that Bornstein would publicize his own wildly, in my view, unprofessional behavior directly to news media. Doing so exposes Bornstein as having made potential ethical as well as legal violations.

Under the American Medical Association’s Code of Medical Ethics, conduct that fails to meet the standard of care has the potential to be a violation. If signing off on a questionable bill of health doesn’t count as “failure to meet the standard of care,” I’m not quite sure what does. And if we look at AMA ethics opinion 2.3.2, we can get a little more insight about what the AMA thinks about public communications.

2.3.2 Professionalism in the Use of Social Media

[Doctors] must recognize that actions online and content posted may negatively affect their reputations among patients and colleagues, may have consequences for their medical careers … and can undermine public trust in the medical profession.”

While the AMA ethics team probably never anticipated anything as bizarre as a presidential candidate’s private physician releasing a letter drafted by the candidate himself, it’s pretty clear that it expects doctors to be professional in their public communications.

Then there’s the issue of medical malpractice, which is a little more complicated. While Bornstein’s actions would undeniably amount to a deviation from what a reasonable doctor would do in similar circumstances, it’s unclear who if anyone, would have standing to sue him for malpractice. Usually, when someone reports being harmed as a result of a false medical report, that person is the subject of the report. Here, we have this weird Trump-as-Cyrano situation. Trump certainly couldn’t sue, and it’s hard to think of a third party who could claim harm as a direct result of Bornstein’s lies.

Here’s the thing, though. The law tends to really disfavor gross deviations from the standard of care when it comes to professionals. In other words, when a doc has knowingly done something egregiously wrong, judges tend to allow for creative interpretations of the concept of “damages.” I’m guessing that the first person who can show that he relied on Bornstein’s letter may find himself the recipient of a hefty cash settlement. Maybe, the American public?