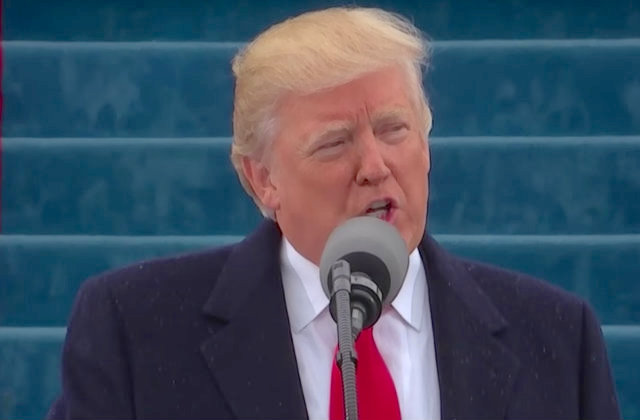 President Trump handed a major gift to conservatives and the religious right yesterday, and unlike his usual habit of blowing his own horn at top-volume, this gift was given behind closed doors. On Thursday, Trump signed resolution H.J. Res. 43. The purpose? To un-do a rule President Obama had passed during the last days of his administration. Let’s take a look at what was happening under the Obama administration, and before that:

The Title X Family Planning Program, (42 U.S.C. 300), was enacted in 1970 as part of the Public Health Service Act. Title X is focused solely on providing family planning, and is the only law of its kind. Under Title X, women, men, and adolescents receive services such that they may “freely determine the number and spacing of children.” Under the law, certain health centers receive funding to assist in preventing unwanted pregnancies. The services include providing contraception, pregnancy testing and counseling, preconception health services, screening and treatment for sexually transmitted diseases, HIV treatment, services to aid with achieving pregnancy, basic infertility services, and screening for cervical and breast cancer. For the poorest individuals, these services are provided at no cost.

And before pro-lifers go getting all riled up, Title X specifically prohibits funding to programs where abortion is a method of family planning (PHSA sec. 1008). Whatever one’s feeling about abortion, I think we can all agree that using federal funding to help people have children when they are ready, help prevent unwanted pregnancies when they are not, and screen for cancer is a good idea. The agencies administering Title X funds simply hand over the money when the organizations provide those services. Seems like a pretty good system to me.

In September 2016, President Obama proposed a rule change, which was finalized in December of that year. The change? Warning: It’s not nearly as inherently-controversial as some groups might claim. The official summary states:

“The amendment precludes project recipients from using criteria in their selection of subrecipients that are unrelated to the ability to deliver services to program beneficiaries in an effective manner.”

In other words, when a heath center is getting federal funding to do cancer screenings, the only thing that is relevant is whether that health center does cancer screenings. Frankly, this is such an inanely obvious concept that I can’t believe we need a law to say so. When you were twelve and your neighbor paid you to mow his lawn, the only thing that was relevant was whether you mowed his lawn. When you buy a new blender and it comes with a $10 mail-in-rebate, you only need to show that you bought the blender and you’ll get the rebate. I get that people hate abortion, but taking away one hopeful mother’s free fertility services because another woman has an abortion is a pretty weird way of showing it.

Pro-lifers generally rely on the balloon-theory logic that funding for any operation that also provides abortions is funding for abortions. While it may seem like there’s a degree of logic at play there, there actually isn’t. For starters, the numbers don’t add up. Most clinics provide far more general heath services (like STD treatment, fertility treatments, and prenatal care) than they do abortions. More important, though, is the manner in which clinics receive their “funding.” They’re reimbursed for their non-abortion services. That’s a far cry from getting general funding that can be used for anything.

The 2016 rule, packed to the gills with common sense, simply made abortion (as well as anything else that was already unrelated) irrelevant to federal reimbursement of other health services. Don’t worry, though, 45 isn’t going to stand by while common sense impacts our healthcare system. This past Thursday, the Senate voted 50-50 to undo the Obama Administration’s Title X rule; our charming Vice President served as the tie-breaker.

Now, states can withhold federal funding from health centers when they don’t like what those centers are doing. There’s no question that many low-income men, women, and adolescents will lose important health benefits because of this revision. There’s also no question that various state governments will abuse their discretion to hold the healthcare of their populations hostage at the behest of the pro-life lobby. But what is confusing is why the Trump administration was so low-key about it all. Donald Trump, despite his absurdly inconsistent views on abortion as a general topic, most certainly owes a good part of his 2016 victory to the far right. Shouldn’t he have appeared onstage to knight himself in the fight against reproductive freedom? I’d imagine that such an event would be met with wild (if utterly uninformed) applause. But POTUS opted for an uncharacteristic less-is-more private signing of the rule. In a private closed-door ceremony without press, the rule was amended while attendees Seema Verma, director of the Centers for Medicare and Medicaid Services, leaders of the Susan B. Anthony List and Concerned Women for America, Rep. Diane Black (R-Tenn. A sponsor of the bill), and of course, Kellyanne Conway, looked on in delight.

In true Trump fashion, the signing ceremony seems to have occurred before any actual research was done on the matter. Ivanka Trump apparently woke up last week and realized it might be a good idea to learn how Planned Parenthood actually functions. According to Politico, FDOTUS recently requested a meeting with Cecile Richards, the head of Planned Parenthood.

“The purpose of the meeting, from Cecile’s point of view, was to make sure that Ivanka fully understood what Planned Parenthood does, how it is funded, and why it would be a terrible idea for Planned Parenthood to be removed from being able to see Medicaid patients. The main thing that Cecile Richards was doing was explaining that the money doesn’t actually go to abortions — we get reimbursed the same way a hospital does. We were clearing up misinformation about how this works.”

Right. “Act first, learn later.” That seems like a smart way to run the federal government.