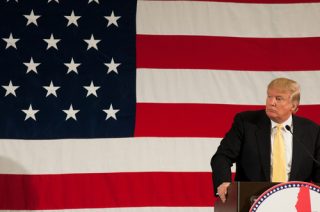 I always love when flag-burning is the topic du jour. It’s the perfect legal litmus test to determine which people know anything at all about American law and history. People will always line up on two sides: those who ignorantly insist flag-burning is some sort of treasonable offense, and those who have at least a middle-school-level understanding of the First Amendment and know otherwise. Until yesterday, I’ve never heard an American leader of any real import even suggest that flag-burning should be a criminal offense. Sure, plenty of political hacks use the soundbite machine to criticize flag-burning as “unpatriotic” or “liberal” or whatever label suits their direct purposes. But even the staunchest guardians of patriotism usually ground their statements in the legal reality of the First Amendment.

Now, though, we’re apparently in a new America – one in which our president-elect doesn’t know (or worse,) doesn’t care about the meaning of the First Amendment. President-Elect Trump tweeted the following today:

Nobody should be allowed to burn the American flag – if they do, there must be consequences – perhaps loss of citizenship or year in jail!

The suggestion that flag-burning should be a crime or an offense that would expatriate American citizens would be laughable if it were put forth by anyone other than an incoming Commander-in-Chief. In fact, flag-burning is hardly even a hot topic that’s debated among the legal community with any regularity in the way things like abortion or gun rights are. It’s just not a grey area of law. Burning the flag, criticizing the government, and speaking out against elected officials cannot be made illegal without amending the Constitution to get rid of the First Amendment. End of story.

In this 2012 video, Justice Antonin Scalia’s attitude and tone is just as important as his words.

He’s not arguing that the First Amendment should protect flag-burning; he’s explaining that everyone knows it unquestionably does protect flag-burning. Nino laid it out for CNN viewers in his characteristic blunt style: “the right of free speech shall not be abridged, and it is addressed in particular to speech critical of the government. That was the kind of speech that tyrants would seek to repress… Burning the flag is a form of expression of speech. Burning a flag is a symbol that expresses an idea.”

Anyone who has even a rudimentary understanding of the Bill of Rights should be aware that freedom of expression, particularly negative political expression, was one of the founding principles of American law and government. To explain in Trumpese, freedom of expression is what “makes America great,” or at least so thought the founding fathers. And, in fact, the U.S. Supreme Court even weighed in. In 1989, in Texas v. Johnson, the Justices invalidated prohibitions on desecrating the American flag enforced in 48 of the 50 states. Of course, the First Amendment does not protect expression that incites violence, is obscene, or illegally impacts individuals; but flag-burning as a concept is no more likely to do those things than is pro-Trump speech.

Trump is constitutionally clueless. Nobody can be stripped of citizen status, and even Scalia agreed 1st Am protects flagburning https://t.co/l3kg3VReb6

In addition to the First Amendment, President Elect Trump might also want to check out 8 U.S. Code § 1481. That’s the federal law which lays out the actions necessary for a U.S. citizen to become expatriated. Most of the grounds relate to a U.S. citizen who voluntarily and formally relinquishes American citizenship by becoming a foreign citizen, or otherwise swearing allegiance to a foreign country. The only grounds on which a U.S. citizen will be deemed expatriated based on his or her actions are the following:

(a) A person who is a national of the United States whether by birth or naturalization, shall lose his nationality by voluntarily performing any of the following acts with the intention of relinquishing United States nationality—

(3) entering, or serving in, the armed forces of a foreign state if (A) such armed forces are engaged in hostilities against the United States, or (B) such persons serve as a commissioned or non-commissioned officer; or

(7) committing any act of treason against, or attempting by force to overthrow, or bearing arms against, the United States, violating or conspiring to violate any of the provisions of section 2383 of title 18, or willfully performing any act in violation of section 2385 of title 18, or violating section 2384 of title 18 by engaging in a conspiracy to overthrow, put down, or to destroy by force the Government of the United States, or to levy war against them, if and when he is convicted thereof by a court martial or by a court of competent jurisdiction.

Just in case anyone is tempted to throw around the word “treason,” I’ve helpfully included the actual definition of the word.

Reasonable minds may differ on a great many things, but I think it’s safe to say that burning a flag isn’t quite the same thing as “levying war.”

The real question about Trump’s flag tweet isn’t whether he’s right. His wrongness is so obvious and so deep that it warrants no consideration. What’s more concerning is why a president elect would make such a statement. Is he attempting to gain popular support for repealing the First Amendment? Is he setting the stage for a presidency that disregards law altogether? Is he simply trying to strengthen popular support at all costs? These are the questions worth asking, and it is our patriotic duty to do so.