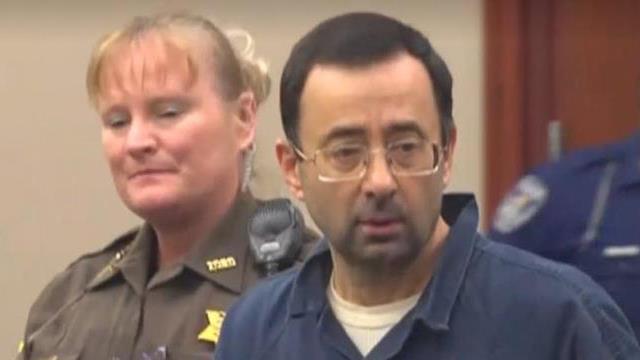 The victims speaking out at Michigan State University and USA Gymnastics doctor Larry Nassar’s sentencing hearing on child molestation charges have probably left his ears bleeding. There are only so many ways we can call the guy a creep. Nassar admitted guilt, and — naturally — his critics are further aiming their fury at Michigan State University. Many of the survivors have claimed their complaints about Nassar fell upon deaf ears. Many have called for MSU President Lou Anna Simon’s head on a platter.

After all, these observers are likely aware that a group of Penn State administrators went to jail for their handling of the Jerry Sandusky scandal in that state. If the facts play out similarly, why shouldn’t MSU leaders face the same penalty? Morally, that makes sense. Legally, it doesn’t, and the reason is because Michigan state laws governing child abuse reporting are pathetically weak.

Most, if not all, states have mandatory reporting laws on the books for cases of child abuse. Those laws require various sorts of people to report suspected cases of abuse to properly-trained authorities within a state social services department. The laws became famous (and in many states were expanded) during the clergy sex abuse scandals of the early 2000s. In Michigan, the Michigan Department of Health and Human Services (MDHHS) is the agency which investigates child abuse complaints under state law.

Michigan’s “Child Protection Law” has been on the books since 1975 and was last updated in 1989. To analyze the law, we need to consider (1) what conduct must be reported to the state, (2) who is required to make a report, and (3) the penalty.

As to the conduct, “child abuse” is defined as “sexual abuse, sexual exploitation, or maltreatment” by pretty much anyone “responsible for the child’s health or welfare.” That’s a pretty broad definition, and it would cover Nassar’s conduct.

As to who must report, state law contains a laundry list of professionals who are absolutely, positively required to report suspected cases of child abuse to the MDHHS. The list is quite specific. Among the people it names are medical professionals and any “school administrator, school counselor or teacher.”

As to the penalty, anyone who is required to report child abuse to the MDHHS but who fails to do so is guilty of a misdemeanor. The punishment is up to 93 days behind bars and a $500 fine. The same section of the law allows civil damages against mandatory reporters who fail to report to the MDHHS.

Great! Let’s lock up Nassar’s enablers, right? They’re the ones who should have stepped in to protect the athletes!

Not so fast. What’s bothersome here is that one could quibble over whether Michigan State University staff are mandatory reporters under Michigan law.  Are members of a gymnastics coaching staff “school administrator[s], school counselor[s] or teacher[s]” under the meaning of the law? A few might have been licensed medical professionals; if so, they are definitely mandatory reporters under that section of the law. However, many were probably not. That potential loophole is a problem, and it highlights a serious issue with Michigan law. Glaringly, the laundry list of mandatory reporters says nothing of coaches or their subordinates, athletic directors or their subordinates, professors (tenured or adjunct), or that catch-all phrase: educators. (Indeed, a 37-page MDHHS publication on the state’s child protection law never once contains the words “coach,” “professor,” “college,” or “university.”) If a pee-wee football coach or a university librarian learns of a credible case of child abuse, should he or she not be forced to report it? Under the current law, it is unclear at best.

Let’s say a prosecutor wants to lock up any of the alleged MSU-affiliated Nassar enablers. A logical avenue would be to charge the enablers for failing to report the victims’ complaints to the MDHHS. In levying any charges under the law we just discussed, the prosecutor would have to convince a judge and a jury to agree that coaches and professors are “teacher[s]” or “school administrator[s]” under the Child Protection Law. Now, granted, given the sleaziness of the Nassar accusations, it’s likely a jury would go along with that characterization and that a conviction would follow. However, it would be risky for a prosecutor to move forward. Any conviction would certainly be challenged on the grounds that the prosecutor and the jury stretched the definition of the current law; that the current law is vague; and, therefore, that the conviction is unconstitutional. An appeals court might agree that a full-time coach at a college is not a “teacher” under the common meaning of the term. That is a loophole Michigan needs to address. No Michigan court cases appear to exist which might clarify the issue.

Other states have their acts together with regards to who must report.

In Pennsylvania, the state rocked by the Jerry Sandusky scandal, the mandatory reporting law is much broader. In addition to naming doctors, hospital staff, teachers, law enforcement officers, child care workers, and clergy as mandatory reporters, Pennsylvania state law requires anyone, “paid or unpaid, who, on the basis of the individual’s role as an integral part of a regularly scheduled program, activity or service, is a person responsible for the child’s welfare or has direct contact with children” to report suspected cases of child abuse.

Bingo. Excellent language. That language covers coaches and activities advisers at all levels. If you work with kids regularly, and something is up, you have to call the authorities. Michigan ought to adopt similar language, and the time to act is now.

The Pennsylvania language, which appears to have been on the books since at least 1995, is one of the reasons why former Penn State President Graham Spanier and two other administrators were charged criminally for failing to report Sandusky to authorities in that state. (Indeed, Spanier and his administrators exchanged emails and agreed not to contact the authorities, but rather to handle the Sandusky matter internally; those emails were instrumental in their later convictions.) Prosecutors who dug into the Penn State disaster could move forward because Pennsylvania law was broad enough to cover a lot of people and hold them accountable for enabling Sandusky.

A quick web search reveals several Michigan State University web pages (example 1, example 2) which discuss mandatory reporting, but at least some of those sites involve an internal reporting procedure, not a report to state authorities. That’s probably because most college professors and staff members don’t come into contact with people who are children and, therefore, applicable under the child abuse statute. Still, the Nassar case highlights why the laws need to be stronger.

[Editor’s note:  this piece has been updated to correct a minor grammatical error.]