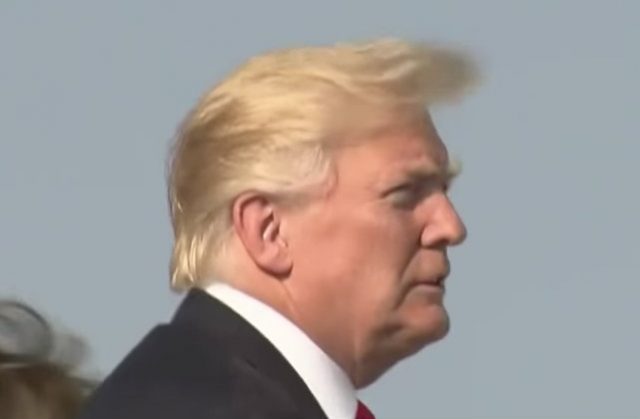 In a hyper-hypocritical row over statues, President Donald Trump has clarified a few things about the way his brain works in recent days. As he tweets on about Confederate heritage and history, it’s worth remembering some statutes Trump once destroyed.

We’ll get to those other statues in a bit. But first let’s recount this week in education-by-presidential meltdown.

He basically didn’t care when large groups of neo-Nazis, Klansmen sans hoods and various other white nationalists gathered under the failed re-brand of the “alt-right” in Charlotesville, Virginia to terrorize and beat people.

He engaged in painful both-sidesism after a white nationalist killed Heather Heyer in an incident his own attorney general termed domestic terrorism. Trump then turned an opportunity to speak to Heyer’s parents into an incomprehensible (and factually incorrect) brag about his very small Charlottesville winery.

(It wasn’t a complete wash, though. Trump popularized a favorite epithet of centrist Democrats–“alt-left“–formerly employed by the likes of Neera Tanden, Al Giordano and Joy-Ann Reid to slur people even slightly to the left of Hillary Clinton and brought disrepute on himself and every moronic alt-centrist who ever used the term in earnest.)

For decent measure, Trump tossed out the idea that some Nazis are like, you know, good people.

Most people found this revealed version of Trump to be…as obnoxious and vile as ever. They always have–Trump’s never been well liked. But power players in his own party are starting to abandon him–and he hates that. President Deals was even sucker-punched by his ragtag collection of capitalists, millionaires and billionaires who dipped out of the useless manufacturing council that everyone had forgotten about until the rats jumped ship. So, of course, he tried to pretend it was his idea to dissolve the council all along. His die-hard Kekistani supporters saw this as epic trolling, naturally, it’s how their personal relationships tend to work out.

But as the lead balloon-like reception to his less-than-leadership sunk in–and as the acceleration of Confederate monument removal was pegged as a direct response to the violence and hatred of his supporters–an exasperated Trump did what he does best. He logged onto Twitter dot com.

And then, he did what he also does very well: he began to recite bizarre and out-of-touch right-wing orthodoxy by praising Confederate statues and bemoaning their eventual absence in the name of history and culture and stuff.

Sad to see the history and culture of our great country being ripped apart with the removal of our beautiful statues and monuments. You…..

…can’t change history, but you can learn from it. Robert E Lee, Stonewall Jackson – who’s next, Washington, Jefferson? So foolish! Also…

…the beauty that is being taken out of our cities, towns and parks will be greatly missed and never able to be comparably replaced!

Ah, those statues. Such beauty.

And, yes, of course, the history. All of it very hard to comparably replace. But let’s take this opportunity to remember a simpler time. Manhattan, 1980. This was a time when Donald Trump’s relationship to statues was markedly different.

That is to say, this was a time when Trump personally had two completely irreplaceable statutes destroyed in order to finish building Trump Tower. Those statutes, the Bonwit Sculptures, were literally standing in the way of progress and commerce. Sure, they could have been removed intact–but that would have delayed construction by a week and a half.

He even used his alter-ego “John Baron” to pose as an art critic and disparage their artistic merit. The Metropolitan Museum of Art disagreed–as they’d hoped to add them to their permanent collection. Actual art critic Robert Miller said:

“The reliefs are as important as the sculptures on the Rockefeller building. They’ll never be made again.”