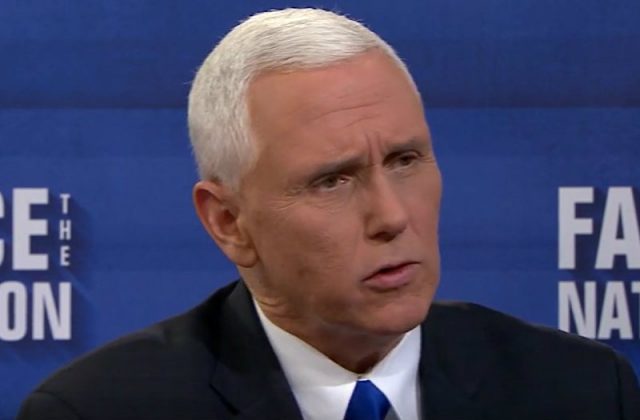 As a politician, Mike Pence has really created quite the blend; the stuff he does publicly is bad, and the stuff he does secretly is often worse. He’s like a gross Midwestern mélange with outright bigotry on the nose and notes of corruption on the back end.

Let’s regroup on all things Governor Pence and public records: Texas v. U.S. is a federal lawsuit over the DACA program that went all the way to the Supreme Court. When the legal work on Texas v. U.S. began, Indiana, under Governor Pence, jumped at the chance to join Texas in the lawsuit and then made kind of a weird move. He hired Barnes & Thornburg, an outside law firm, to handle the lawsuit. Pence could have done the normal thing and then-Attorney General Greg Zoeller supervise the litigation, but instead, he used Indiana taxpayer dollars to engage private counsel to sue our own federal government. Sure. That seems totally normal.

Prominent Indianapolis labor lawyer William Groth called Pence out for his actions via the filing of an open records request with the State of Indiana to make public just how much money was spent hiring outside counsel to do the Attorney General’s job. Pence’s office partially refused to comply. Mr. Groth filed suit to enforce his open records request, but lost at the lower court level. He appealed in June and the Indiana Court of Appeals will hear oral arguments on Nov. 21.

Meanwhile, as vice president, when Pence isn’t staging $200,000 hissy fits at football games, he’s still doing all he can to obscure the record of anything he did while occupying the Governor’s Office back in Indianapolis.  The Associated Press has now requested emails from Pence’s private AOL accounts—accounts Pence regularly used for state business since being given the VP nod by Donald Trump. Putting aside the more obvious questions (“who the hell still uses AOL?” and “but wasn’t Pence the one who freaked out over Hillary’s use of personal email accounts?”), we can focus on the more pressing issue. Our current vice president believes he was and is entitled to be secretive in the carrying out of official state business.

Responses to requests for records of Pence’s work back in Indiana range from the “no comment” to the wide-scale redaction. And let’s be clear. These requests aren’t about an opportunistic politician exposing some personal foible of Pence’s. People are asking about real, important, government work. Pence was behind controversial legal moves involving everything from RFRA laws to abortion restrictions. He attempted to block Syrian refugees from resettling in Indianapolis. He may have contributed to a policy that exacerbated an Indiana HIV outbreak, and he may have known about lead contamination from a superfund site that caused the evacuation of a housing complex. Not only that, but his same AOL account was hacked and used in a phishing scheme that may have defrauded people

It would be disturbing enough to think that a governor-turned-vice president would be so hell-bent on obscuring the nature and history of his own government work. But it’s even grosser when the hypocrisy factor is taken into account. Back when Pence was just a Congressman from Indiana, he introduced the media-protective  “Free Flow of Information Act.” Twice. And guess what he said about it?

“As a conservative who believes in limited government, I believe the only check on government power in real time is a free and independent press.”