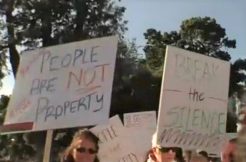 Type “SB 1322” in YouTube or Twitter. You’ll find some search results which claim that there’s a California law that will legalize child prostitution come New Year’s Day. This might sound like it’s legal to be a predator of some sort, but no, don’t worry, that’s not the case.

SB 1322, signed into law back in September, decriminalizes prostitution for children.

“This bill would make the above provisions inapplicable to a child under 18 years of age who is alleged to have engaged in conduct that would, if committed by an adult, violate the above provisions,” the legislative counsel’s disgest reads. “The bill would authorize the minor to be taken into temporary custody under limited circumstances.”

What limited circumstances? This includes if the child is soliciting lewd or lascivious acts in public areas; is found in a public place intoxicated; or if an officer has probable cause to think a felony has been committed.

“The law is supposed to protect vulnerable children from adult abuse, yet we brand kids enmeshed in sex-for-pay with a scarlet ‘P’ and leave them subject to shame and prosecution,” said State Senator Holly J. Mitchell (D-Los Angeles). “This is our opportunity to do what we say is right in cases of sex trafficking: stop the exploiters and help the exploited.”

But Assembly Member Travis Allen (R-Huntington Beach) says this bill will cause more harm than good. He literally called it the “legalization of underage prostitution.”

“Pimping and pandering will still be against the law whether it involves running adult women or young girls. But legalizing child prostitution will only incentivize the increased exploitation of underage girls,” he wrote in a Thursday op-ed against the law. “Immunity from arrest means law enforcement can’t interfere with minors engaging in prostitution — which translates into bigger and better cash flow for the pimps. Simply put, more time on the street and less time in jail means more money for pimps, and more victims for them to exploit.”

Wow, okay, let’s unpack this. As I mentioned before, officers absolutely can interfere with minors engaging in prostitution. Nonetheless, Allen’s underlying premise is valid—we need to give law enforcement the proper tools to combat this. Yes. That’s obvious. And if he believes the law doesn’t give officers enough tools to protect suspected victims of human trafficking, then yes, he should and must bring up those concerns, and fight for that.

But he cannot do this by unintentionally harming children he’s trying to protect. Think about what Allen wrote. Again: “Simply put, more time on the street and less time in jail means…” He’s talking about victims. He’s talking about survivors of sexual assault, coercion, manipulation, and problematic living circumstances.

SB 1322’s “Temporary custody” may not be a vacation, but neither is jail or an actual criminal conviction.

Quite frankly, Allen wasted time by using his op-ed to take potshots at his Democratic Party colleagues rather than jump into a more thoughtful discussion about the bill. Jane Creighton at the Los Angeles County district attorney’s office does a much, much better job at explaining why SB 1322 might be a misguided idea. Here’s an excerpt from an LA Times report from August [emphasis mine]:

At the Los Angeles County district attorney’s office, Jane Creighton, coordinator of its human trafficking unit, urged lawmakers to take a step back. Decriminalization and erasure of records could allow traffickers “to build a Chinese wall” between themselves and the victim, making it impossible for prosecutors to link them together in court, she said.

Many sex trafficking victims also are young, vulnerable women, tied to their abusers through complicated psychological and emotional bonds, prosecutors and social workers said. Officers need the authority to arrest minors to hold them in secure facilities, where they can be provided with services they often do not want to accept, Creighton said.

“Right now, service groups are struggling with what they have in place — there [are] just not enough resources,” she said. “I am not saying these bills should never pass. But we are not ready for them right now.”

And yet the opposite is also true: Criminal penalties might accidentally alienate victims from the investigators who are trying to help them.

“Victims of trafficking should not be housed in prison-like settings,” Kate Walker Brown, an attorney for the National Center for Youth Law, told SF Gate in an August report. “We hear time and time again of the harm that causes. They don’t understand why, if they are the victim, they are in the concrete cell.”

This problem might inspire moral clarity. It’s also too complicated for easy answers because each victim’s story and circumstances is unique.

So the future is going to have to bear this out, and prosecutors will have to face whether SB 1322 truly hinders their ability to combat predators. Is “temporary custody” and other existing measures enough to disrupt the abusive relationship between a predator and the child? If not, California’s lawmakers must continue to adjust, analyze, and improve. But they should never go back threatening children with possible criminal convictions. Why are we going to convict kids for a crime that isn’t even their fault? Why should we ever?