Mika Shouldn’t Just Be Annoyed, She Should Sue The Heck Out of Trump 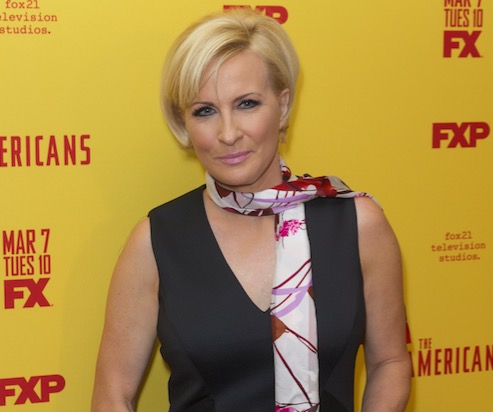 ICYMI, President Trump’s tweets this morning are sparking calls for everything from officially declaring him “incapacitated” to serve as president, to the commencement of impeachment proceedings, to the now-familiar anxiety inspired by proof that our commander in chief is completely unhinged. There’s no doubt that a president multi-tweeting about a news anchor’s appearance and IQ is inappropriate/undignified/deeply weird, but what else does it mean?

LawNewz contributor Robert Barnes did his best to dismiss the notion that Trump could be removed for his morning bully-ramblings, based on the premise that any effort to hold Trump accountable for his actions is, by definition, a liberal coup. The fact is, that not only is obsessively sending obnoxious tweets cause for concern of the neurological variety, but it’s also exactly the kind of conduct for which impeachment was created to curtail. Of course, the limits of impeachment as a remedy haven’t been exactly been tested, but many a credible legal scholar has opined that impeachment was created as a political tool with which Congress can impose its standards for whether a president is properly fulfilling the responsibilities of the office. Fun as it would be to envision a full-scale impeachment over Trump’s idiotic facelift tweet, we all know it’s not going to happen. But what might happen – and maybe should happen—is that our child president may be forced to learn the tough lesson that words have consequences.

Yep, that’s what I said. Mika Brzezinski should consider suing Trump for defamation. After all, sometimes a well-timed civil lawsuit can have some pretty profound consequences. Just ask Paula Jones and Monica Lewinsky.   Would I typically advocate litigating over two moronic hate tweets? Absolutely not. I have serious disdain for nuisance lawsuits and the unethical lawyers who make their parasitic living off them. But a successful defamation lawsuit to call out President Trump for his obnoxious twitterbuse of media figures would serve an important purpose, and I’m not the only one who thinks so.

Floyd Abrams, titan of the courtroom and champion of free speech (not to mention father of LawNewz founder Dan Abrams), has said that he thinks the press should be looking for creative ways to use defamation laws against Trump. At a recent dinner hosted by the Media Law Resource Center to hear from Edward Snowden and Daniel Ellsberg about the tension between national security and an independent media, Abrams called Donald Trump, the “greatest threat to the First Amendment since the passage of the Sedition Act of 1798,” and spoke of an “ important battle” to occur over the next four years.  The Hollywood Reporter reported that Abrams followed up by saying that:

“[the press] ought to take a hard look and see if they have a basis for commencing litigation. They have to think creatively, as no candidate in living memory has denounced the press as he has.

if the relationship is one of constant denigration and threats, it may be time for journalists to think about using libel laws in a way that is constitutional.”

We’d be hard-pressed to find a more zealous advocate of free speech than Floyd Abrams; if he’s suggesting it’s time to use the law to finally muzzle the president, then it’s time.

So would Mika Brzezinski succeed if she were to play the role of such a creatively-thinking plaintiff? Let’s see. Here are the tweets:

First, she’d need to prove that Trump publicly made a false statement of fact (not opinion) about her. In just two tweets, we have several of those to choose from. There’s the statement that Morning Joe has low ratings, the one that Mika Brzezinski insisted on joining him at Mar-a-Lago, and of course, the gem about how she was “bleeding badly from a face-lift.” All three statements are independently verifiable. The “low IQ” part of the tweet would likely read more as opinion than fact, but a good plaintiff’s lawyer would probably throw that in for good measure too.

Assuming there’s no face-lift, no bleeding, no refused interview, and good ratings, Brzezinski would next need to prove that Trump’s lies caused her to suffer financial damages. This would be the most challenging part of the lawsuit, as Brzezinski could have a tough time establishing a causal link to economic harm.   But “challenging” doesn’t mean “impossible.” If she could show even minor financial harm, her lawsuit could proceed. The minute Mika Brzezinski can point to a gig she didn’t get because of her purported facelift, her poor ratings, her pesky interview habits, or her low IQ, she’s satisfied this requirement; there’s no rule that her damages have to be severe or career-ending – just that they are actual.

There’s also a good chance Mika Brzezinski would be considered a “public figure” for purposes of defamation. If she were, then she’d have an extra element to prove – namely that Trump defamed her with “actual malice.”   Basically, this means she’d have to prove that Trump acted knowing his statements were false, or with reckless disregard for the falsity of those statements. In lots of cases, this element is a hard one to prove; but if anything ever counted as “actual malice,” it’s Donald Trump’s relationship with the news media. My money would be on Mika for this aspect of the case.

All this might very well add up to a win for Mika as defamation plaintiff. Of course, the lawsuit would be no simple matter. Practical considerations, such as how such a lawsuit would even proceed against a sitting president, as well as legal ones such as immunity, would likely tie the case up for years to come. Still, though, such a claim may be worth pursing. Beyond the tangible results, such as potential punitive damages and courtroom vindication, there’s also a larger victory at stake. President Trump has declared open season on the media as an institution and its professionals as individuals. What’s more, so many Americans—many of whom are elected officials in the president’s own party – are disgusted by today’s latest example of a powerful man taking aim at a professional woman and lashing out in a manner unbefitting the dignity of his office.

Please just stop. This isn’t normal and it’s beneath the dignity of your office.

Stop it! The Presidential platform should be used for more than bringing people down.

A lawsuit under the very laws Trump has promised to “open up” could hit the spot perfectly.  Speaking of accountability, let’s not forget that the First Lady should ostensibly be doing something to address her husband’s behavior. Let’s all remember:

“Mrs. Trump cares deeply about issues impacting women and children, and she has focused her platform as First Lady on the problem of cyber bullying among our youth.”

Apparently, in this case, Melania’s version of “caring deeply” looks pretty lame; FLOTUS is apparently cool with her hubby’s attack on the MSNBC anchor, and released a statement via her spokeswoman that explained that when “her husband gets attacked, he will punch back 10 times harder.” Interesting. Know what else can get multiplied by a factor of ten? Punitive damages in a defamation lawsuit.