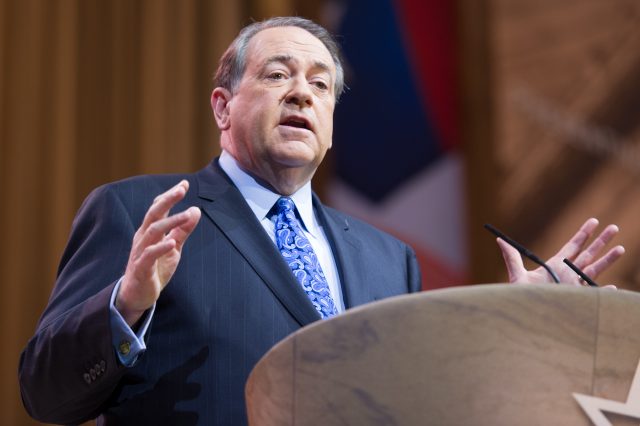 Mike Huckabee called out Lindsey Graham Thursday for being a sissy. It’s good timing, too, because Graham might have been reconsidering his own inanely hypocritical position on the Gorsuch confirmation. Huckabee appeared on Laura Ingraham’s radio show yesterday and said:

“I sometimes wonder what uniform he puts on each morning when goes out to the field to play, and I’m not just talking about the partisan uniform.”

Ouch. Huckabee must have been worried that Graham might have a flash of conscience over the whole “going nuclear” thing. Huckabee’s clear implication that Graham is gay transcends garden-variety homophobia and rises to the level of actual political strategy.

Last week, Graham renewed his promise to do, “whatever’s necessary,” to confirm Gorsuch, on the grounds that “I’ve been a pretty balanced guy and enough is enough.” Graham’s message to the Democrats via CNN was:

That’s some tough (not to mention ridiculous) talk, since “two different ways” is exactly what the GOP is doing here. When Graham mentioned “every other president,” he conspicuously neglected to mention President Obama, his nomination of Merrick Garland, and the confirmation hearing that never followed.

Here’s the thing, though. Lindsey Graham isn’t a total stranger to the idea of integrity. Graham has stood out during and after the presidential election, as a Republican willing to call out Donald Trump for not actually being conservative at all. I wouldn’t have considered that kind of consistency particularly laudable before the 45 took office, but these days, it seems practically heroic. Graham also recently caused some waves by saying that Devin Nunes conducted an “Inspector Clouseau investigation” of Russian interference with the 2016 election. And he even brought up the idea of presidential impeachment during Q and A with Neil Gorsuch at his confirmation hearing.  For Huckabee types, Graham’s willingness to break ranks makes him something of a loose cannon. Given that Graham has said many times that he hopes the Gorsuch vote doesn’t require drastic measures, there’s always the possibility he’ll stand down in the face of changing long-standing Senate rules.

Republican tough-talk aside, having Lindsey Graham defect from the “Gang of 14” to throw aside Senate procedure and confirm Gorsuch is a big deal. Put in context, it’s hard to imagine anyone fair-minded would believe Gorsuch warrants going nuclear while Garland didn’t. Will Graham likely stick with his Republican buddies on this one? Probably. But Huckabee isn’t taking any chances. If Graham balks, Huckabee will have seemed prescient in branding him a player for “the other team.”