Hillary Had One Chance to Oust Trump This Week, and She Really Blew It 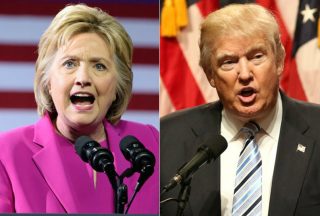 In the end, December 19, 2016 became the watershed moment that never was. The majority of our nation anticipated the first Monday after the second Wednesday in December with emotions ranging from disappointment to trepidation to outright horror. For many, the idea that “Hamilton Electors”  (Republicans united for a Trump alternative) might save us all from the devastating results November 9 was too tantalizing to ignore. Hillary Clinton herself faced the same choice the rest of us did. She could stand squarely behind the movement to flip electors, using her popularity to build momentum of this desperate measure inspired by these most desperate of times. Or she could continue as she began in her concession speech, when she said:

“I still believe in America, and I always will. And if you do, then we must accept this result and then look to the future. Donald Trump is going to be our president. We owe him an open mind and the chance to lead. Our constitutional democracy enshrines the peaceful transfer of power.”

The decision couldn’t have been an easy one for Hillary, or for her inner circle. The imagined coup of the electoral college set a new stage for Clinton. It was her choice whether to cast herself as a savior, who would deliver us from President Trump at any expense, or as a stalwart keeper of the realm, whose unwavering wisdom would dictate a guarding of our democratic system above all else. Ultimately, Hillary Clinton did neither; she acted not as savior or sage – but as politician. She waited it out, looking for the perfect moment to make her entry; when it arrived, it wasn’t quite perfect enough, and Hillary missed her chance.

Today, Politico published an exclusive that pieced together the Clinton campaign’s ambivalent strategy in working with the Hamilton Electors:

“Call logs, emails and text messages reveal a Clinton campaign walking a tightrope — never fully endorsing the effort, but intentionally declining to stamp it out.”

The Politico story detailed the doomed timeline. Clinton’s people were silent about all things Electoral College for the month following the election. Then, on December 12, “the dam appeared to break,” when reports surfaced indicating Russia had influenced our election. John Podesta issued an urgent statement supporting the demand by Democratic electors to receive an immediate intelligence briefing. Podesta continued to tread lightly, though. His statement centered around the need for information, and was not a #NeverTrump battle cry.

Podesta’s reluctance to rally Democratic electors to unseat President Elect Trump was likely pretty disappointing for Colorado Elector Michael Baca; Baca, a co-founder of the Hamilton Electors, had hoped to unite Democrats and Republicans in a quest to flip the electoral college to anyone but Donald Trump.

The plan really could have been perfect. Baca, a former Marine, and Bernie Sanders supporter, became an elector bound (but unwilling) to vote for Hillary Clinton. With Baca as non-Clinton-supporting emissary to the Republican electors, the two groups might have come together to vote their individual consciences on December 19th; even if the vote resulted in no candidate receiving the necessary 270 electoral votes, the House of Representatives might choose a mainstream Republican candidate. Baca’s plan needed some powerhouse backing – the kind of backing only Hillary Clinton could really provide. Pantsuit Nation may be ready to march on Washington, but it’s not going to do anything that Hillary opposes. She told us to accept the results of the election, and we were listening. Redirecting passions toward changing the election results would have required a nicely-packaged plea from Clinton, spelling out why faithless electing is really the right thing to do.

In retrospect, December 12th may have been the date on which Hillary Clinton missed her last shot at the 2017 White House. She had one perfect opportunity to use the momentum of the Hamilton Electors without appearing a simple sore loser. The allegations of Russian involvement with the election were stunning. A credible argument could have been made that no elector should be forced to cast a vote based on potentially fraudulent election results.  Framed that way, the argument would focused on the integrity of the election process, and not about the undesirable conflict between a popular versus electoral winner.  Such an argument would be consistent with Clinton’s brand, and would still have allowed her to unite Trump-haters. But neither Clinton, nor Podesta, nor anyone else in the Clinton camp ever made that argument. The window closed, and December 19th happened. On that day, Michael Baca and seven other Democratic electors voted against Clinton. But only two Republican electors defected.

The Republican party united its electors with the kind of sweeping force Hillary Clinton declined to even attempt. Over a dozen potentially-problematic Republican electors were systematically disqualified, while several others were wooed by the Trump whip team. Electors in Alaska were even accommodated such that they were permitted to cast votes in an alternate location to avoid a snowstorm.

Moving forward, one thing is clear: Republicans of 2016 are willing to unite in the pursuit of power, no matter what that union requires. The Republican Party put forth nine serious candidates for president, and it grudgingly accepted its nominee only when no other option remained. It almost shattered to pieces as former presidents declined to attend its convention, and as sitting Congressman spoke out publicly against its nominee. And yet, when an out presented itself – even one that would likely guarantee that another Republican would still win the presidency – the GOP rallied around their President Elect. The electoral college itself, in that regard, is a microcosm of our major political parties; Democrats are far more willing to cling to principle over unified pragmatism, and Republicans will join forces even when doing so means empowering the most detested president elect in American history.