Gina Haspel is Immoral, and She Probably Just Lied in Front of Congress 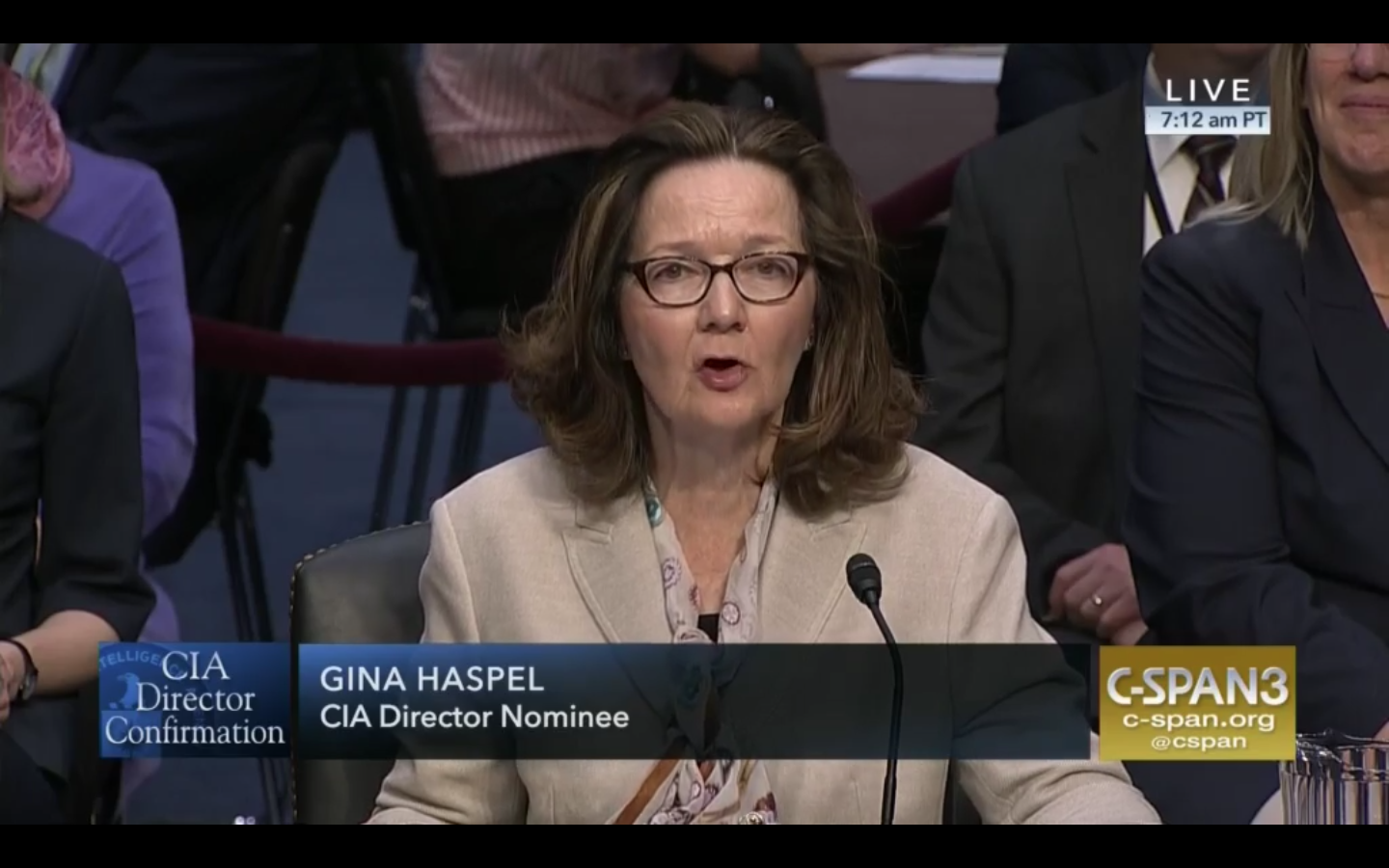 Gina Haspel‘s public confirmation hearings ended hours ago. The former torturer is currently making a bid to lead the Central Intelligence Agency–an organization which illegally engaged in torture as part of unsuccessful efforts to extract intelligence from accused terrorists in the aftermath of 9/11.

The basic process was a farce that would have seemed implausible were it reproduced in film. Three points stand out from Wednesday’s hearing: (1) Gina Haspel is immoral and unsuited to lead a fake marching band; (2) she is also a coward who is deathly afraid of transparency; and (3) Gina Haspel is a proven liar who could plausibly be prosecuted for perjury. Let’s approach each in turn.

1. No Known Concept of Morality

Haspel was repeatedly asked whether she thought torture was immoral. She repeatedly refused to answer this very easy–for a moral person, at least–question. Here’s a typical exchange:

This back-and-forth continued on. At no point did Haspel attempt to answer Harris’ question regarding the morality of torture. Given an out on the question of legality, the woman who believes she is entitled to lead the world’s largest intelligence agency couldn’t be bothered to offer a condemnation of torture in moral terms. Instead, she offered a painful series of dodges and dime-store metaphysics about the CIA’s laughable, fictional, and false “higher moral standard.”

Haspel’s postmodern dreck was further highlighted by an interaction with Senator Jack Reed (D-RI) on a similar question. Reed said:

Senator Harris was asking you about the morality of enhanced interrogation techniques–the waterboarding. At the time you were involved in it, in fact, fairly directly, you expressed no moral concerns. In fact, you have suggested that it was good tradecraft and that it contributed to information that was developed…if one of your operatives were captured, subjected to waterboarding and enhanced interrogation techniques–which I believe you supervised–would you consider that to be moral–since, perhaps, the other entity did not have legal restrictions–and good tradecraft? As you appeared to do when you were involved in it previously.

To which Haspel opined, “Senator, I do not believe the terrorists follow any guidelines or civilized norms, or the law. CIA follows the law.” Reed interjected here to clue Haspel in to the precariousness of her own analogy. In no uncertain terms, Haspel keyed in on the CIA’s own barbarity viz. torture. That is, torture is the work of uncivilized terrorists with no respect for the law. Haspel pretended not to understand the concept of being hoisted by one’s own petard. Reed reiterated the scenario: a CIA officer is captured and waterboarded. He once again asked if it was moral and once again got no response. He said, “Your response seems to be that civilized nations don’t do it, but uncivilized nations do it–or uncivilized groups do it. A civilized nation was doing it until it was outlawed by this Congress.”

Haspel finally revealed her true colors, “Senator, I would never obviously support inhumane treatment of any CIA officers.” Torture can be used by U.S. spooks against accused terrorists, but the alchemy of nationalism means it would be “inhumane” to torture the torturers themselves. Gotcha.

Gina Haspel doesn’t give one half of a bad hook-up about the truth or transparency–especially as it relates to Gina Haspel.

In a stunning admission, Gina Haspel tells Sen. King that she is the one who decides what documents the CIA will declassify about HER OWN record.

Here’s the interaction the ACLU is describing:

Senator Angus King: Who’s deciding what’s classified and what isn’t in terms of what’s released to this committee?
Haspel: Senator, we are following the existing the guidelines; there are very–
King: Who’s deciding?
Haspel: We are following the existing guidelines–
King: Who’s ‘we’?
Haspel: I-I have chosen to follow the guidelines that exist for–
King: So, you are making the classification decisions as to what materials should be released to this committee?
Haspel: I’m electing not to make an exception for myself, but I am adhering to [the guidelines]…
King: That’s fine. I just wanted to understand that.

Haspel was later questioned by Harris on this same point. She asked, “You are serving as the authority over whether CIA information concerning you will be classified or not…will you agree to recuse yourself from the responsibility and the authority to make decisions about whether or not that information will be classified or not? Will you agree to recuse yourself from of responsibility and authority–yes or no?” To which a very furrow-browed Haspel replied, “Senator, I am following the guidelines that exist at CIA.”

Senator Ron Wyden summed the issue up succinctly. He noted, “I regret to have to say there is no greater indictment of this nomination process than the fact that you are deciding what the country gets to know about you and what it doesn’t. And so far, the American people have only been given information that has been designed to help you get confirmed. Everything else has been classified.”

Here’s a list of ten questions Haspel was too afraid to answer.

In response to a series of smarmy and knob-polishing questions from Senator Tom Cotton (R-AR), Haspel said, “Senator, CIA follows the law.” This isn’t even remotely true. The CIA maintained an illegal torture program for years.  The CIA also has a long and checkered history of violating various domestic and international laws too lengthy to discuss here.

On numerous occasions, Haspel claimed the CIA has not historically engaged in interrogations. On one instance, she claimed, “CIA does not today conduct interrogations, we never did historically and we’re not getting back in that business.” That’s blatantly and obviously false. The CIA’s torture program was itself premised on interrogations. The agency’s preferred euphemism for torture was “enhanced interrogation techniques.” This illegal program ran for at least five years and probably longer. While it may be true that the CIA doesn’t today engage in interrogations, historically that’s exactly what they did. In fact, the CIA has a lengthy entry on its own website about the agency’s history of interrogations–in one instance, a South Vietnamese man was interrogated for two years. By the CIA’s own admission, “US and South Vietnamese intelligence and security officers interrogated the man for more than two years, employing every interrogation technique in both countries’ arsenals, in an effort to obtain his secrets.” Haspel is either a very bold liar or has a very skewed understanding of what the word “historically” means.

Finally, in response to questioning from Senator Susan Collins (R-ME) as to whether Haspel was involved in the creation of the CIA’s torture program, Haspel said, “I was not read into the program until about a year into its existence.” Hmm. As award-winning national security journalist Spencer Ackerman noted, Haspel was the base chief at a CIA black site where she personally oversaw the torture of at least one detainee–only months after the first detainee was tortured. There’s a bit of weasel language in Haspel’s reply here, and maybe the fuzzy dates do line up in Haspel’s mind–but this statement was, at the very least, misleading in the extreme.

Haspel was chief of base at a black site where Abd al-Rahim al-Nashiri was tortured months after the 1st detainee was tortured. She's saying under oath that she wasn't "read into the program" until a year in.

Gina Haspel’s answers and evasions today reflect the state and nature of the CIA itself. In the realest sense, Haspel is actually the ideal fit there: a liar and Eichmann-defense-inclined functionary who invokes orders and procedure when it benefits her and her colleagues at the agency. At the same time, Haspel maintains that selective leaking of classified information bolstering her own position is really no big deal.

Haspel is the perfect combination of Trump-level absurdity and the classic D.C. perma-swamp.

Editor’s note: this article has been amended with further details on the CIA’s history of torture and interrogation.