Eric Schneiderman’s Statement Just Made the Situation Way, Way Worse For Him Legally 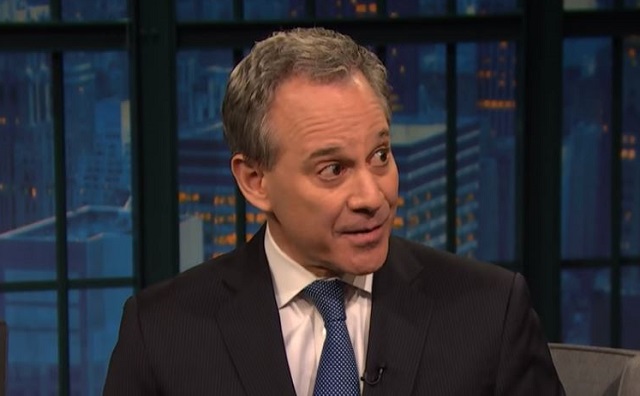 Monday evening, four women came forward claiming that while in relationships with New York’s Attorney General Eric Schneiderman, the New York top lawman assaulted them. The specific allegations, as reported by The New Yorker, were that Schneiderman, “repeatedly hit them, often after drinking, frequently in bed and never with their consent.”

At this point, I must be suffering from some sort of abuse fatigue; as the disturbingly high numbers of women come forward every day reporting new sexual crimes committed by prominent men, it’s becoming increasingly difficult to muster commensurate outrage.

I had no trouble, however, being truly shocked over Eric Schneiderman’s inexplicable response. Here’s what he said:

“In the privacy of intimate relationships, I have engaged in role-playing and other consensual sexual activity. I have not assaulted anyone. I have never engaged in nonconsensual sex, which is a line I would not cross.”

To the casual observer, this might sound like a flat denial of wrongdoing. It really isn’t, though.

From a legal standpoint, this statement is vaguely disastrous for Schneiderman. These women’s allegations – which have included slapping and choking – have the potential to expose Schneiderman to criminal liability.

Here’s the New York Penal Code for assault and for sexual assault – either of which could relate to the Schneiderman allegations:

Schneiderman’s statement comes awfully close to confirming that the violent acts in question did actually occur. Not a good look for the AG. If a prosecutor could prove that any of these women suffered physical injury as a result of Schneiderman’s reckless, negligent, or intentional actions, he’s in trouble.

Schneiderman’s reference to role-playing was likely his way of raising consent as a defense. Consent – legal for “you said I could do this” – can absolutely be a valid defense to assault. If, in fact, the women agreed to being hit or choked during sex as part of a truly consensual role-play, there’d be no assault. The problem is, though, that anyone who asserts the “not guilty because of consent” defense admits to performing the underlying action. And consent is a finicky defense, because to work, it must have been knowing and voluntary on the part of the person giving it. Even if the person throwing a punch thought his partner had been consenting, he might have been wrong. In such a case, no consent means no defense to criminal assault.

The other thing about consent, Schneiderman must know, is that it has a limited scope. Just because a person consents to one thing (sex, for example) doesn’t mean she consents to all things (being slapped, for example). Again, admitting that he engaged in role-playing as a direct response to accusations of physical assault leaves the door wide open for the possibility that what was naughty sex in Schneiderman’s mind was, in reality, a full-on crime.

And why in the name of all that is Weinstein, would anyone voluntarily admit to engaging in potentially legally-risky sex? The burden of proof is on prosecutors. Proving details of long-ago sex would be difficult if not outright impossible. Why on earth would any law enforcement professional offer up an unsolicited admission to something so potentially problematic? I just don’t get it.

There’s no upside for Schneiderman here. His statement wasn’t an apology, so there are no PR points to be won. It wasn’t a full admission of guilt either, but rather, it is a factual admission that could come back to bite him in his role-playing ass. For a guy who has recently shown a serious gift for strategy with respect to plans to prosecute President Trump, I’d frankly have expected better.