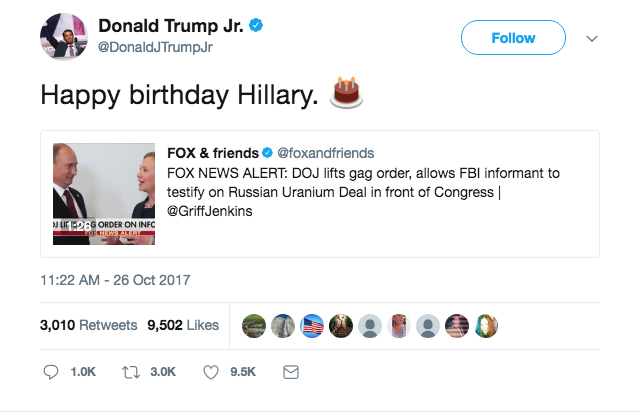 President Donald Trump‘s older son today sent a tweet suggesting that the Department of Justice was being used to go after his father’s one-time political rival Hillary Clinton.

The story Trump Jr. linked to concerns the broader scandal currently engulfing the Clintons, their foundation, and key figures in the Barack Obama administration after recent revelations that Obama’s Department of Justice and FBI kept mum for years as Russian criminals routed millions to the Clinton Foundation while seeking and receiving a favorable decision for Moscow on an energy project.

The scandal has created an appearance of impropriety for the Obama-era officials involved.

David Klion, a former editor for Al Jazeera America, perhaps summed up the mood of liberal Americans likely to be frustrated by Trump Junior’s mean-spirited tweet.

Definitely not troubling that the president’s son is implying that DOJ is being used to go after political rivals pic.twitter.com/IvaXUUK0F9

Such accusations aren’t likely to hold any legal weight, however, as Donald Trump Jr. does not have an official role within the Trump administration.

It is, in fact, Hillary Clinton‘s birthday. She’s 70-years-old today.